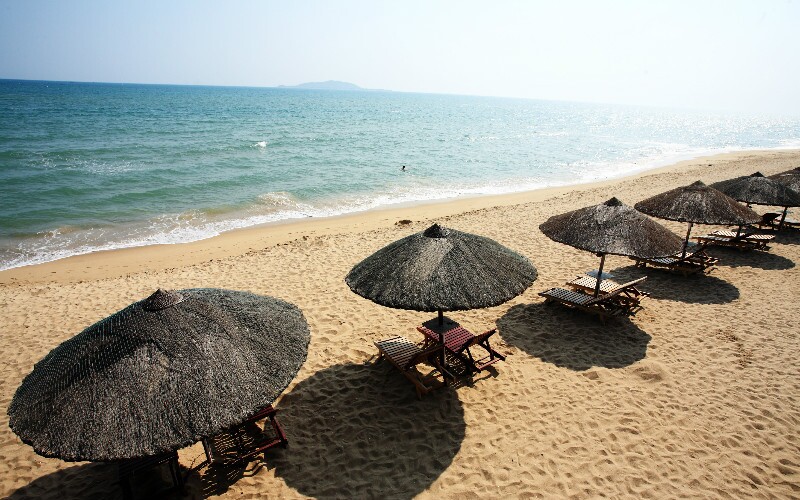 Haikou is located on Hainan Island. It has a typical tropical marine climate and annual sunshine duration of over 2,000 hours. Bring a few essentials if you travel to Haikou, such as sunglasses and sunscreen to protect yourself from the ultraviolet radiation. The annual temperature in Haikou is around 26 °C (79 °F) and annual rainfall is 1664 mm (65.5 inches). More than 150 days in Haikou have more than 1 mm (0.04 inch) of rainfall each year. Unlike the inland cities, the temperature does not change much from season to season. Winter may even be warm, making Haikou an ideal place for tourists to spend their winter holiday.

Heavy rains and high temperatures are most likely in Haikou during the summer months (June to August). Storms and typhoons hit Hainan Island four to five times each year during the autumn, making spring and winter the best seasons to visit. Spring and winter are also known as the busy tourism seasons in Haikou, and hotel and tour prices increase by over 100% especially during the winter. We recommend that you book your travel plans early with your travel advisor.

Summer is very hot and rainy (from June to August) in Haikou. The highest temperature can reach over 38 °C (100 °F) and the average temperature is around 28 °C (82 °F). Summer is also known as the rainy season in Haikou. An umbrella, sunglasses, and sunscreen are necessities in Haikou during the summer. We also recommend wearing a T-shirt and shorts.

Summers and autumns each year bring tropical storms and typhoons. The average temperature during the autumn is around 25 °C (77 °F). T-shirts and normal pants are suitable at this time of the year.

Winter in Haikou is like summer in Canada. Not many cities in the world enjoy a warm winter, and Haikou is one of them. Sometimes when the cold air hits Hainan Island, the temperature in Haikou falls a bit. But most of the time the weather during the winter is fine, with an average temperature of around 18 °C (64 °F). Wearing long-sleeve shirts and jeans is fine, but please bring a coat or jacket.