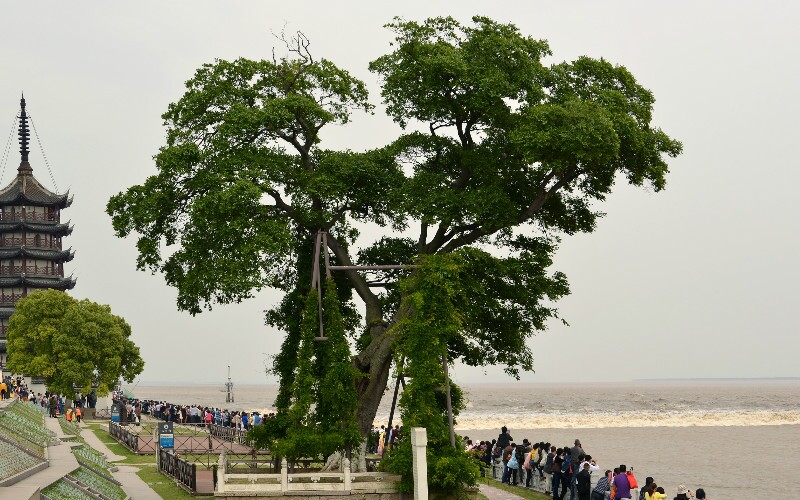 Haining Travel Guide - How to Plan a Trip to Haining

The city of Haining is situated in the northeastern part of Zhejiang Province, on the southern tip of the Yangtze River Delta. It is located 125 kilometers west of Shanghai, and some 60 kilometers east of the city of Hangzhou. To the south of Haining lies the famed Qiantang River.

Haining attracts the attention of travelers, owing, in particular, to the spectacular annual tides that rush up the Qiantang River. Each year, thousands of tourists from around the world flock to Haining to watch the famous tide bore. Tidal bores occur about 120 days a year in Haining. The International Qiantang River Tidal Bore Watching Festival is held each year in response to the increasing popularity of this recurring event. The festival takes place on the 18th day of the eighth lunar month.

Other sights in Haining worthy of a visit include Haining Culture Street, where you can see ancient buildings dating from the Ming (Ce 1368-1644) and Qing (CE 1644-1911) Dynasties; and the Ming Dynasty period home, the Chen Family Residence.

The Qiantang Tidal Wave — Largest in the World

Haining attracts the attention of travelers, owing to the spectacular annual tides that rush up the Qiantang River. Each year, thousands of tourists from around the world flock to Haining to watch the famous tide bore.

When the tide approaches, the sight of its mighty surge has been compared to the sight of ten thousand horses racing side by side across an open plain. The height of this special tidal wave can reach 9 meters. Its earthshaking sound rumbles across the water like muffled thunder, its crushing force eerily reminiscent of that of an avalanche which gains speed as the momentum of its cumulative weight propels it forward.

The scene of the Qiantang River is ever-changing, as is the height of its waters where they empty into Hangzhou Bay. When the frothy tide appears in the distance, it initially looks like a white rainbow, given its natural curvature, rising from a plain. As it surges forward, the tidal bore gains speed. Some of the local observers of this regularly recurring phenomenon even race it in their automobiles during the final stages to see if they can keep abreast of it as it gains speed.

As the tidal bore proceeds up the Qiantang River, the aftermath of the surge remaining in Hangzhou bay continues to make its presence felt. The "boiling waters" underneath the surface of the bay, depending on the strength of the tidal bore, can sometimes form a huge circular "ribbon" on the surface of Hangzhou Bay, a sight that is particularly majestic to behold at nighttime.

You are not recommended to watch the tidal bore on September 11, 2014. Though the 18th day of the eighth month of the Chinese lunar year (September 11, 2014) is renowned as the best day to watch the tidal bore, it is by far the most popular day with Chinese tourists. Thus you may meet traffic jams and spend 3 hours to get there (it only takes 1 hour ordinarily from Hangzhou).

On days around the 11th the bore will be of a similar height and you will get a better view of it. Arrive early for the best vantage points.

The Park is located south of Yanguan Town, with an area of 16.24 hectares. This is one of the top ten parks in Zhejiang Province, and the best place for watching Haining tidal wave, a marvelous natural phenomenon in the world.

Haining tidal wave is well-known for its turbulent and breathtaking scene. The tides are tall and changeable in a blink of an eye. People can watch the tidal wave twice a day, and there are about 150 days in a year that this phenomenon happens.

It has been a tradition since the Ming Dynasty that people watch the tidal wave on August 18 of lunar calendar, when the tidal wave is the most magnificent. Now every year on this day, there is a tidal watching festival here, numerous people gather to watch this stunning scene, and there will be many performances and activities at the park.

Located at Cultural Street in the town of Yan Guan, this old mansion house was the residence for Chen Yuanlong, a prominent and respected scholar, one of the ministers under Emperor Yongzheng of Qing Dynasty.

The house is more than 400 years old, covering an area of about 8,000 square meters, with elegant design and solemn atmosphere. The courtyard is elegantly decorated with rockeries, bridges, interspersed with plants, with a stream gently flowing southward. The 600-year-old tree – podocarpus – is still standing tall like a witness of time.

The three treasures of the House are Chen family members' calligraphy works, the original plaque bestowed by Emperor Yongzheng, and the 600-year-old podocarpus still flourishing as ever.

This street has rich cultural heritages. Strolling along, you will be immersed in the atmosphere of tranquility and antiquity. Old houses, temples, all have come through the change of time and history. Or you can sit at a tea house, and relax by sipping a cup of tea.

Because of the leather goods, Haining is called "leather capital of China", so it is no doubt that leathers are the most typical goods in Haining. Its leather production industry took off in the 1980s. With good marketing, Haining has expanded her influence; bring about product upgrades and better branding. In Haining, you can buy either brand or ordinary leather and fur products. Thus, shopping in Haining is major in the purchasing of leather and fur products.

Established in 1994, Haining Leather City is so far the largest leather shopping center not only in China but also in Asia. The first-stage project covers an area of 160,000 square meters, where the first floor of Haining Leather City sells suitcases and leather wares, the second floor is for leather costume, the third floor is for fine furs and luxury leather wares, and the fourth floor is the catering center. The second-stage project of the leather city covers an area of 260,000 square meters, which is mainly for raw material market, shoes square, cowboy city, commercial building, catering center, and Tao Leather Happy Carnival. With more than 2,000 leather companies occupy in the Leather City, you will find high-low-grade leather products in it. The price of leather products in the Leather City sometimes is very high, but you can bargain with shopkeepers (except for the famous brand shops). Otherwise, there are guides in the Leather City, so if you are afraid of getting lost in the Leather City, you may employ a local guide before entering it. Now, the leather city is not only a commercial center but also a scenic spot in Haining.

Haining belongs to the monsoon area of subtropical zone, and has favorable natural conditions. It enjoys four distinctive seasons, affluent rainfall and sunshine, and a mild weather. The annual average temperature is 15.9 °C, and precipitation is 1187 mm.

Haining receives 60 percent of its annual rainfall from May to September. During this time, the rainfall is frequent and the air is damp and muggy. Spring (March - May) and autumn (September - November) are the most suitable time to visit, when the weather is the most pleasant.

Haining is located on the Shanghai – Hangzhou railway line. Haining Railway Station is located in the middle of the city, close to the Leather City. There are frequent trains that operate between Haining - Hangzhou and Haining - Shanghai. There are a few D trains (D trains are Bullet Trains, the average speed of which can reach 200km/h) from Shanghai to Haining. The journey takes only 1 hour by D train. Even on a slow train, the travel takes no more than 2.5 hours. Travel from Hangzhou to Haining on a D train takes only half an hour, while on a slow train, it takes a full hour. In addition, there are direct trains to Haining from Nanjing, Guangzhou and Ningbo.

There are buses from both Shanghai and Hangzhou to Haining. The trip from either city to Haining takes about an hour.

A tour of Haining could be done as an extension to one of our Hangzhou tours, or you may contact us for a tailor-made itinerary.