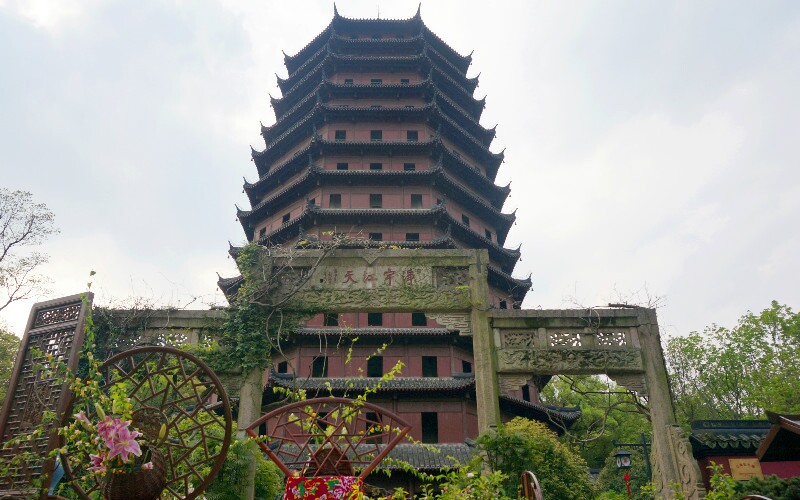 The present 13-storied pagoda was renovated in the 26th year of Emperor Guangxu's reign of the Qing Dynasty (1644-1911). It was believed that any unwanted natural phenomenon could be subdued by the building of pagodas, according to Buddhist understanding. Fortunately for tourism in Hangzhou, tidal waves don't seem to have been significantly suppressed, and they still hold the world record of 9 meters (30 feet). Seen from the outside, the magnificent masonry-structured Six Harmonies Pagoda has 13 stories, standing at 59.89 meters (196.5 feet) tall, but has only seven stories inside, with a spiral staircase connecting each story. Its top is well-equipped with lights that guide the ships when sailing on Qiantang River at night. Standing on the top of the pagoda, it offers you fine views of Qiantang River Great Bridge (the largest double-decker bridge ever built in China) and Qiantang Riverside, which is extremely beautiful at night.

The body of the pagoda tapers off from the bottom to the top with 104 iron bells hanging from the graceful upswept eaves, and the Sumeru pedestal is delicately adorned with various patterns, such as birds, beasts and Apsaras. A number of Buddhist cultural relics are also retained in the pagoda, which are highlighted by stone sutras. The Ancient Chinese Pagoda Exhibit Garden is built next to the Six Harmonies Pagoda, where the famous pagodas of China are scaled down and delicately sculptured, fully displaying the great achievements in ancient architecture.

In addition, the Six Harmonies Pagoda is a wonderful place for appreciating the tidal bores of Qiantang River, which are extremely spectacular during the Mid-Autumn Festival. It has become a tradition for the locals to appreciate the spectacular scene since the Song Dynasty (960-1279), attracting millions of visitors each year.

The Six Harmonies Pagoda is very close to West Lake, Leifeng Tower and Song Dynasty Town, so you're highly recommended to visit them on the way.