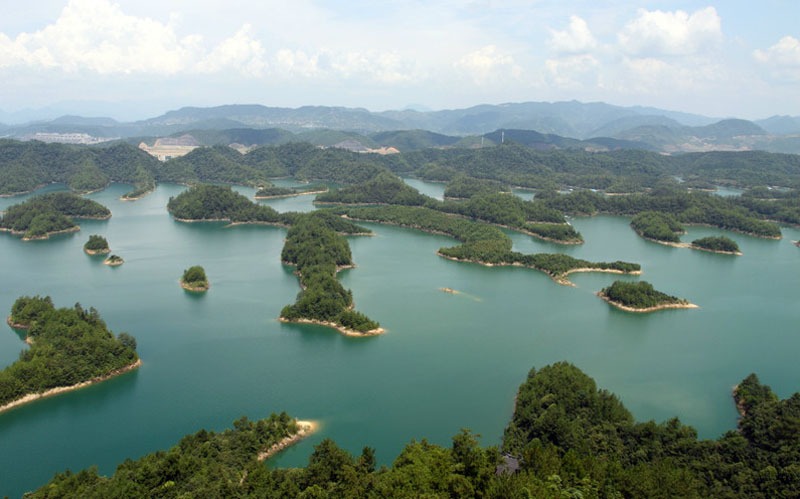 Located in Chun'an County around 160 kilometers west of Hangzhou, in East China's Zhejiang Province, ( see China Map)Thousand Islets Lake is currently the largest man-made lake in China. It got its name from the 1078 islets in the lake. The lake is famous for its crystal-clear water and picturesque scenery. Covering an area of 573 square kilometers, the lake is more than one hundred times larger than West Lake in Hangzhou. A forest covers nearly 93 percent of the lake area, which is home to over 1,800 varieties of plants and 2,100 wild animals. With an average depth of 34 meters, its water visibility can reach 7 to 12 meters. See all beautiful lakes in China

Apart from its tranquil natural scenery, the lake is also a popular diving spot for scuba enthusiasts, because below the surface lie the remains of two magnificent ancient cities: He Cheng and Shi Cheng ('Lion City' 狮城 /shrr chnng/).

About These Underwater Cities

Both ancient cities have been submerged for 55 years. They were not discovered until a local tourism official explored the lake's potential as a scuba diving spot in 2001. The diving crews found that the cities were intact including brick walls, wooden beams, and stairs, even after being submerged for so long.

He Cheng, also called Chun'an Ancient City, was built in AD 208. It was an important town in Zhejiang in ancient times, with convenient waterway transportation and a rich culture.

Why the Cities Are Underwater

In 1959, in order to supply the electrical needs of the fast-growing city of Hangzhou, the Chinese government built the Xin'an River Hydroelectric Station. A dam was constructed, and these two ancient cities were submerged in the resulting artificial lake. Besides these two ancient cities, 27 towns, more than 1,000 villages, about 50,000 acres of farmland, and thousands of houses were left at the bottom of the lake. 290,000 people had to relocate for this project.

How to Visit the Underwater Cities

At present these two ancient cities have not been explored by the local tourist administration. The only way to visit the ancient cities is by diving, which can be arranged through a diving club like Big Blue Diving Shanghai.

Biking Around the Lake

Biking around the lake is an interesting adventure. The road is in good condition. It may take two days to bike all the way around. See our Thousand Islets Lake biking guide for more information.

On of the most popular ways to visit the lake is to Take a cruise boat around the lake and enjoy its beautiful scenery. There are many cruise routes for travelers to choose. All routes take travelers to some of the islands.

There are three wharfs along the lake.

China Highlights can help you customize a tour from Hangzhou. Shanghai and other places to visit Qiandao Lake. Read more information on Qiandao Lake

Direct buses from Thousand Islets Lake are available at Qiandaohu Long Distance Bus (千岛湖长途汽车站). From 5:20 to 18:00, buses depart every 40 minutes.