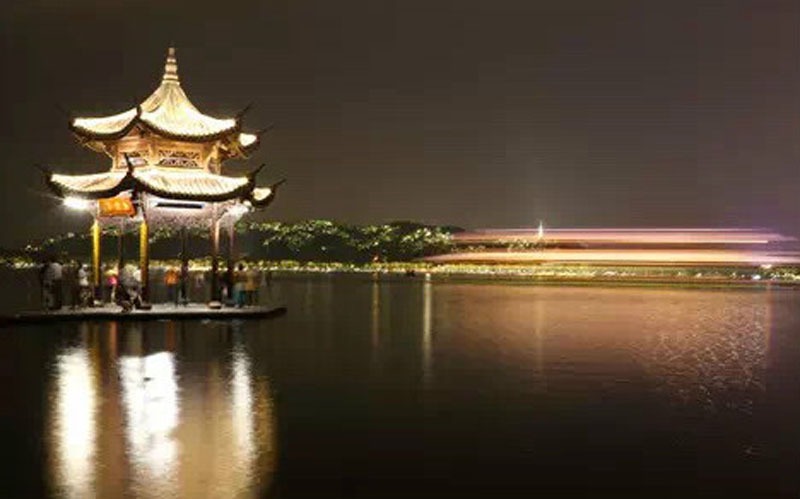 This is a performance reflecting the long and splendid culture of the region. Songs, dances, opera, acrobatics and stunts are integrated in this performance to present Hangzhou's rich ancient civilization and remarkable customs. The performance consists of five scenes lasting around 1 hour in total.

This scene is a recreation of solider training in the Wuyue Sate over one thousand years ago. The drum and horn are the two main instruments used in this scene. In ancient China the drum and horn were used in the army to stimulate the solider into courage, similar to the modern bugle used today.

In this scene the drum beaten and horn blared soldiers rush to the stage and stand in line, then Qianwang -ruler of the Wuyue Sate, a mighty and courageous man appears on the stage and they perform the training performance.

Dating back a thousand years, this scene is deeply rooted in the Wuyue culture. Hangzhou began to earn its prominence in history in the Wuuye State Period when it was served as the capital of the kingdom and ever since then Hangzhou has gradually become one of the nations most important economic, cultural and political centres. The second Scene - The Prosperity of Southern Song Dynasty

Hangzhou saw its political and economic heyday in the Southern Song Dynasty. Marco Polo is believed to have visited China during this time and he was amazed to see huge cities of over a million people, vast amounts of commerce and busy river and canal traffic.

The Third Scene - The Romance of Liangzhu

This performance is based on the tragedy, Liangzhu. Liangzhu is a well known story in China. The performers express the story using vivid body language, dancing, acrobatics and combined with excellent singing they effectively present the story to a tearful audience.

The Legendary West Lake is where many romance stories and legends allegedly took place. The "Romance of Liangzhu", "Legend of the White Snake", "Love Story of Suxiaoxiao" and "Yuanyu" all have there background here.

Ancient court music is performed in this scene. The ancient Chinese emperors were an indulged group.  They entertained themselves with special music which was created by the court musicians for their enjoyment. The music is indeed very melodious and it will remind you of the long gone past. Pretty girls in their elegant silk dresses will gracefully dance to the melody. Hangzhou is famous for its silk production and pretty girls. The silk wrapped elegant figures alone will be a feast for your eyes.

Another feature of this scene is the picking tea dance.

The Fifth Scene - Get Together at the West Lake

This scene is a mixed bag and includes drum beatings, ballet performances, some modern shows and cartoon performances which result in a grand getting together gala. Regardless of who you are, where you are from, converge at the West Lake and enjoy the breath-taking scenery.