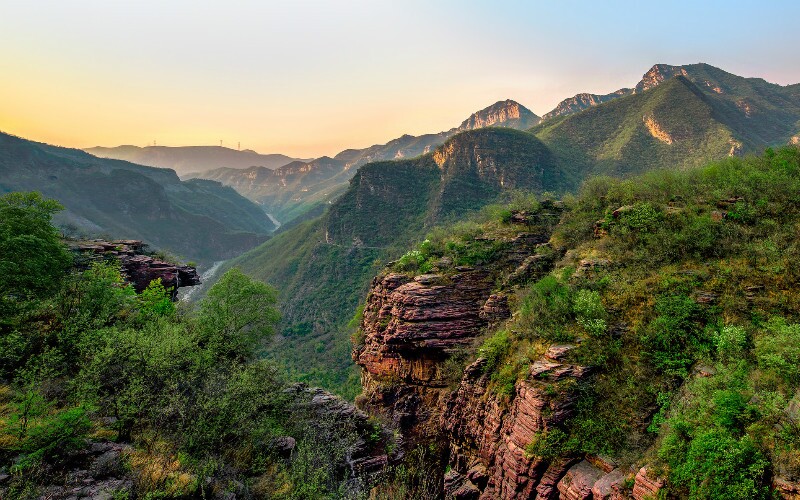 The Shaolin Monastery in Henan

Henan Province is the most important birthplace of Chinese civilization. The long history leaves the province a lot of historical relics and religious sites, like White Horse Temple and Longmen Grottoes in Luoyang City, and Shaolin Temple and Mount Songshan in Zhengzhou. If you are interested in Chinese history and culture, Henan might be a good place to travel around. The highlight in Henan Province should be the Mount Songshan lying southwest of Zhengzhou (northwest of Dengfeng), and it is one of the most famous mountains in China because of the numerous scenic spots and historical sites, the magnificent peaks, and the grand old trees. Shaolin Temple, one of the most famous Buddhist temples in China, located near the base of Mount Songshan and has been included into the UNESCO World Heritage List. Shaolon Kung Fu is well know at home and abroad for its Zen culture and wonderful performance.

Henan Province is located in the Central-eastern China, with the short name is 'Yu' (豫) and the capital city is Zhengzhou. Lying in the middle and lower reaches of Yellow River, it plays the most important role in the development of Chinese civilization and Chinese nation. Henan Province ('he' means 'river', here refers in particular to the Yellow River; 'nan' means 'south') got its name from its geographic position that most part of Henan is sitting in the south of the Yellow River. About 4,000 years ago, China was divided into nine states, and Henan Province was named Yu State which was the center of these nine states, hence the short name 'Yu' (豫). According to the historical data, the Chinese name of China (Zhongguo, 中国) originated from Henan Province, because in ancient times, 'China' (Zhongguo) meant the center of a country which referred to the area of Henan Province centering Luoyang City.

Due to the advantaged geographic location on the Yellow River, Henan Province is considered as the cradle of Chinese civilization. On this old-line province, scatter plenty of historical treasures from primitive times. According to the fossil of the ancient ape man unearthed in Nanzhao County, NanYang City, about 500,000 years ago, there were human beings living in Henan Province. Among those numerous sites of primitive cultures, the relics of Yangshao culture have the largest scale. The Yangshao Culture is a culture in the Neolithic Period (about 5,000 BC – 3,000 BC), travelers can visit the Relics of Yangshao Culture in Sanmenxia City.

Luoyang City has been the capital for nine dynasties cover a period of more than 1,500 years since Zhou Dynasty (770BC-221BC). There are many historical sites in Luoyang: the White Horse Temple, one of the oldest Buddhist temples in China and the cradle of Chinese Buddhism, is first built in 67 AD. Visitors can enjoy the Chinese traditional architectures in the temple. Longmen Grottoes is one of the three treasure houses of stone carvings (another two are the Mogao Grottoes in Dunhuang, Gansu and Yngang Grottoes in Datong, Shanxi) in China. The grottoes were first carved in the North Wei Dynasty (386–534), about 1,500 years ago. In addition, the Millennium City Park in Kaifeng city is a historical and cultural theme park which recreates "Qingming Shang He Tu" (Riverside Scene at Qingming Festival), the great treasure of traditional Chinese art. Visitors in the park can enjoy the beautiful scenery with numerous ancient architectures of Song style, ships in ancient style, and the green lakes, grass and trees.