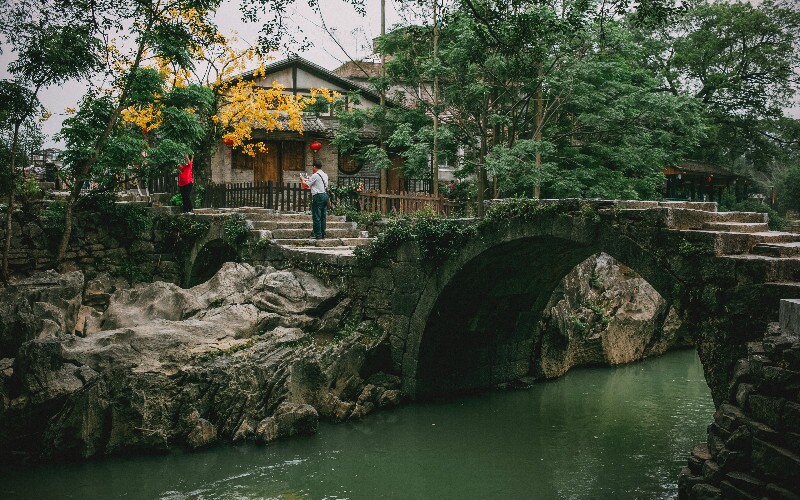 Hezhou Travel Guide - How to Plan a Trip to Hezhou

Hezhou city has beautiful natural landscapes and a long history. Many ethnic groups live together here. Tourists can enjoy quiet rural scenes, vast primeval forests and natural reserves which can be called natural zoo and botanical garden. Beautiful sceneries, like hot springs and waterfalls, can be seen everywhere. Besides, there are also cultural sights like Huangyao Ancient Town which is a combination of stalactites caves, charming rural scenes and historical heritage of Ming Dynasty and Qing Dynasty, Wen Ming Pavilion, Ancient banyan tree with a history of a thousand years and so on. It is worth mentioning that He Street Ancient Town, ancient tower, beautiful Fushan Temple, Stone City and unique buildings called Weiwu of the Hakkas which are all standing in the river are quite attractive and famous as well.

Hezhou is also a city where different ethnic groups inhabit together. Cultures, manners and customs of Tu People and Yao People are especially unique and charming. Festivals and celebrations of different ethnic groups such as Fushan Songs Festival, Fireworks Festival, Lantern Festival in Fuyang Street etc. all show the folk-customs, long history and rich culture of Hezhou.

Located in the juncture area of Guangxi Zhuang Autonomous Region, Hunan Province and Guangdong Province, Hezhou has the famous snacks of different places like Guilin rice-flour noodles, Liuzhou Gemelli Pasta, Nanning Lao You Fen (Old Friend Pasta), plain porridge with pickled vegetables and so on. Besides, Hezhou has its own special cuisine too. Near the Hezhou Bus Station, there is a snack street, or food stall street, where tourists can have a taste of snacks with the local flavour of Guangxi Zhuang Autonomous Region. It is not expensive to eat in Hezhou. Mostly, it only cost 20 RMB to 30 RMB for two people to eat at a food stall, beer included. The cost will be a little higher during boom season.

Hezhou Prefecture is located in the juncture area of Guangxi Zhuang Autonomous Region, Hunan Province and Guangdong Province. National Line 207 and National Line 323 run across the territory. Hezhou is regarded the east gate of Guangxi. It has the name of "Thoroughfare that Connecting Three Provinces".

In Hezhou, the starting price of the taxis is mostly 2 RMB to 3 RMB.

The starting price of the tricycles is 2 RMB. And the ticket price of the special lines varies according the distance.

Climate in Hezhou City belongs to subtropical monsoon climate. The climate is moderate, with the annual average temperature of 20 °C or so, the annual precipitation of 1500 mm to 2000 mm and the average annual frost-free period of more than 320 days. Hezhou is suitable for travel most parts of the year.

In the spring, larges sheets of rape flowers blossom in Bezhen Town of the coutu seat of Fuchuan County. Besides, a traditional festival of the Hakkas living in Baisha Town falls on the eighth day of the second month of the lunar calendar. It is also the time when azalea blossom. So, tourists can enjoy themselves more if they go to Hezhou in festivals.