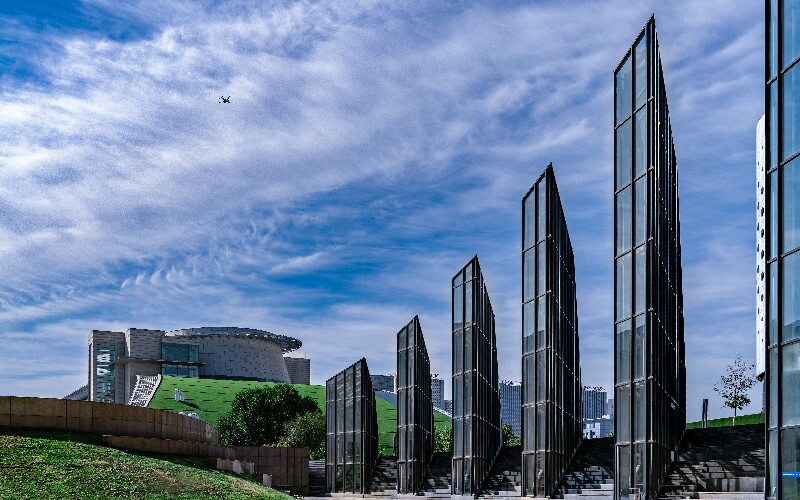 Founded in 1957, Inner Mongolia Museum is the largest comprehensive museum in the Inner Mongolia Autonomous Region. It has a collection of more than 150,000 items, featuring paleontological fossils, Khitan cultural relics displaying Mongolian history and culture. The most important collection is the exquisite Golden Crown of the Xiongnu dating back to the Warring States Period (475–221 BC).

Scroll down to find introductions to the exhibition halls, must-see collections, and other travel tips for Inner Mongolian Museum.

Golden Crown of the Xiongnu

The Features of Inner Mongolia Museum

The museum expresses strong modern elements, regional features, and local minorities' characteristics. Known as an Inner Mongolia "encyclopedia", it reflects hundreds of millions of years of ecological, geological, and paleontological changes and the developments of the civilizations on its grasslands, exhibiting landmarks of the development of the economy, society, and civilization of this autonomous region.

The National Unity Baoding (‘Ceremonial Drinking Vessel’) is located beside the entry hall, near the front door.

This round bronze baoding shows stateliness with its two tall ears, solid tripod, and exquisitely-patterned tripod body and tripod neck. The patterns symbolize the landform characteristics of Inner Mongolia and scenes of cattle herds and sheep flocks. The saddle-shaped tripod ears and the horse-hoof-shaped tripod feet reflect the good horses and fine horsemanship of Mongolia and express good luck and happiness.

With its abundant resources, such as ancient biology fossils, current biology, historical relics, and ethnic cultural relics of the autonomous region, the museum displays a ‘grassland culture exhibition series’ with the theme of ‘prairie culture’ represented in both of the basic displays and the thematic displays. These displays are distributed through exhibition halls on three stories with a total of 14 display areas.

The scenery presented is as vivid as life.

They are easily understood as they are concisely and dynamically exhibited.

These displays are arranged in a crisscross pattern with multi-faceted, multi-angle exhibits, which systematically describe aspects of Inner Mongolia.

There are more than 100,000 sets of artifacts in Inner Mongolia Museum, which can be classified as historical relics, ethnic and modern cultural relics, and fossil specimens.

The museum holds 44,000 objects relating to ethnic history in its specialist collections. Among these, quite a few are rare treasures seldom seen in China, especially the artifacts relating to the northern Mongolian tribes: the Xiongnu (匈奴 /sshyong-noo/), Xianbei (鲜卑 /sshyen-bay/), and Qidan (契丹 /chee-dan/).

The museum also pays great attention to collections of national folk cultural relics. At present, there are more than 3,000 sets of such objects, which completely reflect the lifestyles and customs of the ethnic groups of Mongolia: the Ewenki (鄂温克族 /er-wnn-ker dzoo/), Oroqen (鄂伦春族 /er-lwnn-chwnn dzoo/), and Daur (达斡尔族 /daa-wor-urr dzoo/). Among these, costumes of Mongolian women from different parts of Inner Mongolia as well as Mongolian religious artifacts are the most attractive.

Inner Mongolia is also known as the 'Land of Fossils'. Through years of archaeological excavations, a considerable number of fossil specimens from across the ages have been collected in Inner Mongolia Museum, which have attracted global attention.

The Crown of the Xiongnu Tribe

Made of gold with a weight of 1,394 grams (3 lb 1 oz), it is a national treasure and the only gold crown of Xiongnu Chanyu (a monarch of the Xiongnu ethnicity) found so far. The crown has a golden eagle on top and a cap band embossed with a pattern of a sheep and a wolf. The eagle stands on the top of the hemispherical crown, watching the battle between the wolf and the sheep.

The Crown of the Xiongnu Tribe

Nurosaurus was the largest Asian Cretaceous dinosaur, with a body length of 16 meters (52 feet), a height of 12 meters (39 feet), and a weight of more than 60 tonnes (66 tons). It was named after Qagan Lake, where it was discovered.

The Yunyao Incense Burner is a rarely seen porcelain artifact of the Yuan Dynasty (1279–1368) and has a height of 42.7 centimeters (16.8 inches) and a width of 25.5 centimeters (10.0 inches). With a straight burner mouth, round drum abdomen, a rectangular straight ear on each side of the burner mouth, and three unicorns carved in its neck, this incense burner has very special features and is a "national treasure".

The Precious Cultural Relics of the Liao Dynasty

To learn more about Mongolian culture and appreciate as many precious collections as you can, a guided tour with a private English-speaking guide is needed. Here are our most popular Inner Mongolia tours for inspiration:

Our professional tour guides will give you insights into Inner Mongolian and best utilize your time at the museum. Just tell us your travel needs!