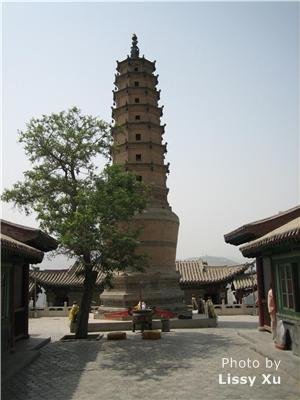 The elegant White Pagoda of Hohhot is an excellent specimen of antique Chinese architecture that has endured for nearly 1,000 years. It has artistic, religious, and historical significance that have kept it in the interest of both Chinese and foreign observers for many years. The White Pagoda is the most exquisite remaining pagoda built in the Liao Dynasty (907–1125).

Anyone visiting the city of Hohhot would do well to stop to admire and investigate this work of engineering and craftsmanship.

The Structure, Decor, and Contents of White Pagoda

The tower really begins under the ground where its hidden octagonal base is hidden. The immediate above-ground portion is a "pedestal" with elaborate carvings on its face all the way around, and the pagoda then rises in seven stories, each with its own eaves and balconies.

Structure: The octagonal shape is maintained throughout, until the top is reached, at which point there is a cap roof and small upward, point-ended projection striking out into the sky. The whole building ascends to a total height of 55.5 m (182 ft). The stories alternate as to having a door or a window (odd numbers a window, even numbers a door).

Materials: The basic material used is brick, but it is reinforced by wooden rafters that help to better stabilize the tower against the impact of earthquakes.

Inside: Numerous figurines of Buddhas, Bodhisattvas, and Warriors are depicted in various postures along the outside of the pagoda, and the inside is filled with Buddhist scriptures and inscriptions in Chinese, Mongolian, and other languages. In fact, an amazing 10,000 volumes of scriptures are inscribed.

History of the White Pagoda

The original name of the pagoda was Wanbu Huayan Jing ('10,000 Volumes of Huayan Scriptures'), but it later took on the name Bai Ta ('White Pagoda') due to its appearance. It was first built some time around 1000 A.D. during the Liao Dynasty by the Khitans, and has been rebuilt or repaired several times since.

The Khitans ruled the northeast section of modern China for much of the Middle Ages and the old classic term for China used by Marco Polo in his book, "Cathay," derives from "Khitan." The Khitans seem to have imported and adapted the Huayan school of Buddhism from India and decorated this pagoda with a set of head-carvings that were a cross between dragons and makura. The makura was a common fictional creature in Indian legend, but the dragon was quite Chinese — so it seems they blended these features.

The huge stash of inscriptions stored inside the tower point to other types of blending and inter-ethnic communications as well: lingual, cultural, religious, and economic.

How to Get There and When to Visit

Hohhot is 480 km (290 mi) from Beijing, and it can be reached from Beijing by train or plane, though it will take at minimum of six hours by land. White Pagoda is found in the east suburbs of Hohhot and a bus or taxi will grant easy access.

Due to the coldness of the local climate, it is best to avoid travel to Hohhot during winter, and even in the summer one should bring something warm to wear at night when it still gets somewhat chilly.

The beautiful nearby Gegentala Grassland is at its best from mid-July to early-September, and the seven-day Nadam Fair activities that every tourist should want to witness are generally held in late July, making such the most ideal time to visit. The fair will give you a great opportunity to watch horse races and ride your own stead across the open terrain to join in ethnic celebrations.

What Other Attractions are Nearby?

Hohhot is filled with many worthwhile tourist destinations, among them: Wang Zhaojun Tomb, Xilituzhao Palace, Mengniu Dairy company, Inner Mongolian Museum with its artifacts of Hun, Mongolian, and other national groups, the Qing-era Grand Mosque, Five-Pagoda Temple, Da Zhao Temple, and the Zhao Great Wall that touches the north end of town.