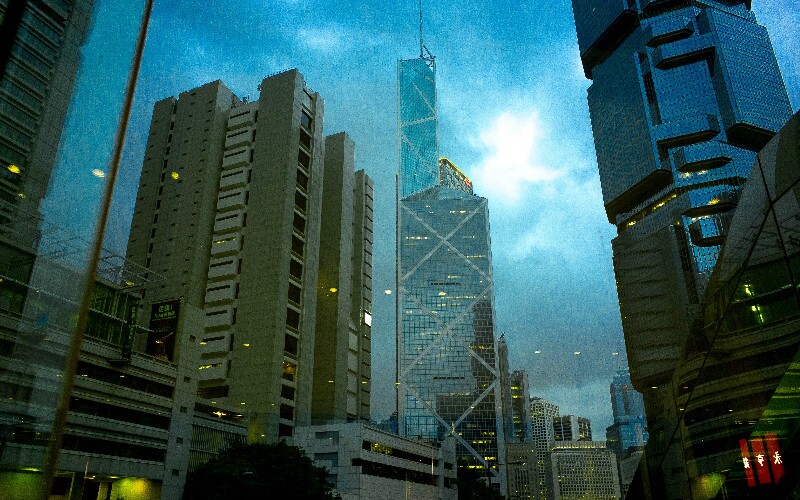 The IFC Tower and mall stands out

Comparatively small Hong Kong ranks in the top 10 cities in the world with the most millionaires. Where do these wealthy people go shopping?

Wealthy Hong Kong shoppers prefer to personally shop for luxury products in the malls instead of shopping online. Four of these malls are on Hong Kong Island, and one is in Kowloon... Mainly wealthy people browse the stores in the Landmark where the shops are the most luxurious and the price tags are about the highest in the city. It is out of the range for most regular people even wanting to window shop there.

The mall is in the lower floors of the 5-star luxurious Mandarin Oriental Hotel. There is a cavernous atrium with luxury stores, and sometimes the space contains extravagant holiday decorations. The company that owns the mall owns four other adjacent malls that are interconnected. The IFC Mall in the IFC Towers is the best luxury mall in China for tourists wanting to enjoy luxury shopping while enjoying fine views, fine dining, and convenient location. Unlike the Landmark Mall, it is a favorite of window shoppers and tourists.

The waterfront view is among the best in Hong Kong. It overlooks Victoria Harbor, and its rooftop cafes and bars are notable. It is a place to watch the daily Symphony of Lights.

Convenient transport: It is a busy pedestrian thoroughfare for people passing between the Central ferries, the MTR subways below, and the rest of the area. People enjoy shopping on the way to the airport via the convenient, direct Airport Express subway below it.

A Variety of Shops and Restaurants

Though the stores are mostly high end, the prices are more moderate than the Landmark, and the presence of inexpensive places to eat such as McDonalds and Starbucks makes it a favorite place to congregate.

The ritzy shops, a 3-star Michelin restaurant, and the big Four Seasons hotel puts it definitely at the top of the luxury class. Pacific Place in Admiralty is huge! It has a mixture of many luxurious stores and some moderate-priced stores, and a wider selection than the first two. Some like to walk the endless corridors for window shopping perhaps on their way through the Admiralty MTR station below or on their way to Hong Kong Park adjacent. But it has an impersonal, overwhelming feel to it.

A large Harvey Nichols store is a main attraction as is an international gourmet supermarket called Great Food Hall. There isn't as high class a selection of gourmet restaurants as in the preceding two. The presence of the Watson's that sells cheap toiletries and similar products helps to make it a place where people can buy a plethora of everything from groceries to articles for dally use to very high priced luxurious items.

This mall is located in the very expensive Causeway Bay area near Russell Street which until recently was the most expensive luxury shopping street in the world. It is a sister mall of the Landmark and owned by the same company. Like the Landmark, mainly wealthy people enter the luxury stores in the Lee Gardens. It attracts customers from one of Hong Kong's highest priced residential areas nearby.

This mall is a complex of several buildings in a plaza. Compared to the others, it has more Asian oriented fashion and products and features Japanese, Korean, and Taiwanese brands and stores as well as locally owned stores. The highest priced shops are mixed in with non luxury stores such as Hong Kong's biggest Chinese book store. Rounding out this list of the top five luxury malls is this large new one in a strategic location. It is in Hong Kong's tallest building called the ICC Tower that is in Hong Kong's budding new finance and business center. It isn't fully developed yet, but its location and the Ritz Carlton above makes it one of Hong Kong's most luxurious.

The construction around it discourages pedestrian traffic. Customers seem sparser than the busier malls. When the construction projects are completed, it should go up in rank in popularity and ritziness. By the end of the decade, a bullet train line from Guangzhou may connect with the MTR stations below and greatly increase visitors.

Visitors usually enjoy it for its central location, open feel, blend of shops, variety of restaurants, and entertainment areas. It was built by the same company that built the IFC Mall and towers and has the same comfortable feel.

We Can Facilitate Your Shopping Trip

Instead of using taxis, we could arrange private transport for your tour.