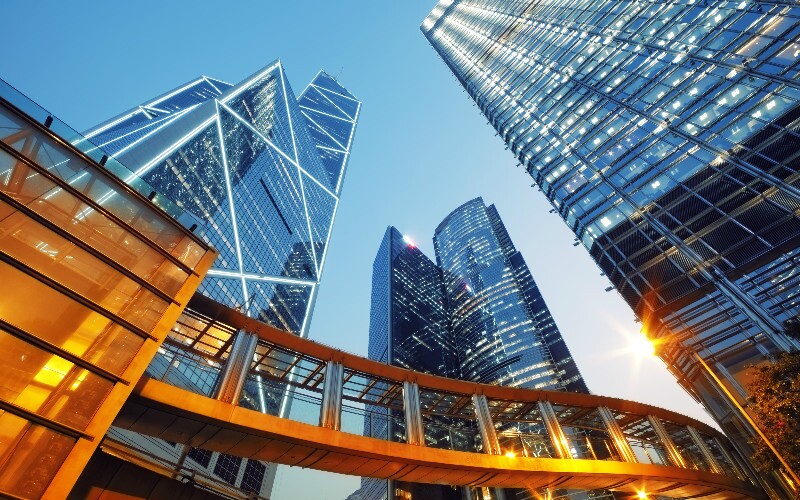 The building was completed in 1990, and it was once the tallest building in the world outside of the United States. Before that, the tallest skyscrapers were all in the US. It is more than 300 meters tall -- more than 1,000 feet. It was designed by the famous architect named IM Pei who was born not far away in the nearby city of Guangzhou and educated in the United States. It is reminiscent of the Willis Tower that was formerly called the Sears Tower in Chicago that was the tallest building in the world for a long time. But the Willis Tower is composed of rectangular blocks and has rectangles in its framework, and Bank of China Tower is composed of triangular sections with triangular frames and is reminiscent of crystalline growth and structure. The glass facets of the building reflect the light and the surroundings, so it is like a bright and shiny white crystal, while the Sear Tower appears dark and brooding.

The sharp corners and bright, reflective features caused a lot of controversy when it was being built. The Chinese have a belief system called "Feng Shui" that dictates architectural style. IM Pei was aware of Feng Shui principles. His wife was a Chinese woman who studied landscape architecture. In Feng Shui, a mirror brings the energy of the Feng Shui water element that represents wealth. Mirrors are used to expand space; to draw the beneficial Chi energy, wealth, and health in; and to reflect bad, evil energy. Imagine the controversy that was caused when the biggest building in Asia went up and it reflected, redirected and soaked up the geomantic energy in the whole city of Hong Kong! Sharp angles, the building is full of sharp angles, represents an attack on the places pointed at, and people in Hong Kong comment and joke about which institutions and buildings are the major targets.

The Sightseeing Terrace on the 43rd floor is open to the public, and it is a good place to see the city of Hong Kong. Hong Kong has about the most very tall skyscrapers of any city in the world, and it is said to be among the world's most architecturally beautiful cities. Almost every evening when the weather is not stormy, the Bank of China Building along with most of the other big buildings around Hong Kong Bay take part in a sound and light display, and the buildings are lit up with computer controlled lighting effects in concert with music and narration.

The building is historic because it was the first building taller than 300 meters or 1,000 feet that was built outside of the United States. It can be said to be the forerunner of the current tall skyscraper boom around the world. It was an achievement of architect IM Pei that has received many architecture and design awards. In a way, Pei's coming to Hong Kong was like coming home since he was born in the nearby city of Guangzhou. The Japanese company Kumagai Gumi built it. The building was officially inaugurated in 1990.

To see the fine free sound and light show called the Symphony of Lights that utilizes the tall buildings around the bay, you can watch and listen to the music and narration at the Avenue of Stars that is a pedestrian area along the bay that is also a highlight in itself.