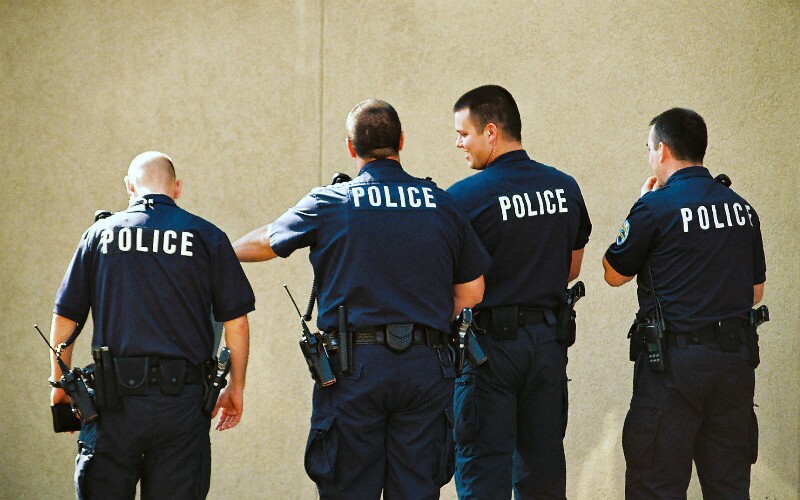 The Police Museum isn't big compared to HK's well known museums. It has only about 570 square meters of public display area. It is packed with hundreds of artifacts, photographs and documents in displays and signs on the wall. The Triads and the Japanese are the main nemeses described in the museum. You can see WWII weapons and photographs and learn what the police did during that time. You can also learn a lot about Triads and drugs if you want to study the material.

Most of the signs are in Chinese, but there are a lot of English language signs and captions you can read. Most of the museum's exhibits deal with the time from the late 1800s until the 1940s. There are four small rooms and a larger room. Each room is a gallery. The galleries are the Orientation Gallery, the Police Then & Now Gallery, the Current Exhibition Gallery, the Heroin Factory, and the Triad Societies & Narcotics Gallery that is the last room in the back.

At the museum, the first thing you see is a small cannon next to the door. It is said that that cannon came from the old Tai Po police station at Lantau Island. When you go in, there is a reception desk on your right. The whole museum is long and narrow. There is one main hallway, and rooms branch to the sides.

Past the reception desk, the first room on the right is the Orientation Gallery. It is the biggest and probably the most interesting room. You can see a small display of rifles and machine guns that were used from about 1890 to the 1940s. On the walls, you can see lots of pictures of various police corps at various places in Hong Kong from about 1900 to the 1940s. On the far end, there is the stuffed head of one of the last wild tigers ever to be seen in HK. It was shot in 1915 after it killed one or more people. There are different accounts about the tiger. It may have killed two policemen. It weighed about 289 pounds. The head is a big as a human head.

A little further down the main hallway, there are stairs leading down to the Police Then & Now Gallery. Above the stairs, there is a boat woven in bamboo or wood strips that is example of the kind of craft some Vietnamese tried to sail in to escape Vietnam in the 1970s and 1980s. There is a display case with old sports trophies and two other display cases. You can see manequins in uniforms along one wall. On the walls, a lot of Chinese signs instruct about police history at various times. Some signs are in English too. There are old pictures of Hong Kong when the British first colonized the territory. In interesting picture near the door is a large picture of the famous Walled City of Kowloon dated 1988. The picture shows the building just before it was torn down. The ten layered "Borg" structure has a stream coming out of it that was probably an open sewer.

The next gallery on the ground floor is the Current Exhibition Gallery. It is used for thematic displays that are changed from time to time. Past displays were about the traffic police, police stations, and police corps in China proper and the Republic of China.

The only gallery on the right side is a tiny room called the Heroin Factory. This gallery instructs a little on how to make heroin. Some of the articles were from an actual illegal production site that was dismantled by the police in 1980s. They seized raw materials, utensils, burners and wrappings that you can see.

The last gallery at the back is the Triad Societies and Narcotics Gallery. The Triads are organized crime. It shows pictures of their rituals and their costumes. The displays instruct on their rituals and activities from the late Qing Dynasty times of about 1900 until recently. There are displays about how they tried to smuggle drugs.

In 1964, the Police Historical Records Committee was formed to collect records and artifacts relating to the history of the police in the territory. The collection was housed in the police headquarters building at first. The Police Museum was started in 1976. It was moved to the present site on Wan Chai Gap in 1988. It was recently renovated.

This museum sits on the area called the Wanchai Gap. It is a pass from Hong Kong City in the north and the southern side of the island between Victoria Peak and another peak. Bus No. 15 goes there from Central and Wan Chai, and then it climbs up the road up the mountain. The bus stop is close to the intersection of Coombe Road and Stubbs Road. When you get off there, walk up the hill a little and turn left at Coombe Road. Finding the place from there is tricky though, because the museum isn't visible from Coombe Road. At the intersection, there is a playground. Walk along the road for about 200 meters, and you'll see a sign pointing to a parking lot and another playground. Go to the end of the parking lot, and you'll see the blue Police Museum sign with an old cannon. Go up the stairs and follow the sidewalk up the hill for 200 meters.