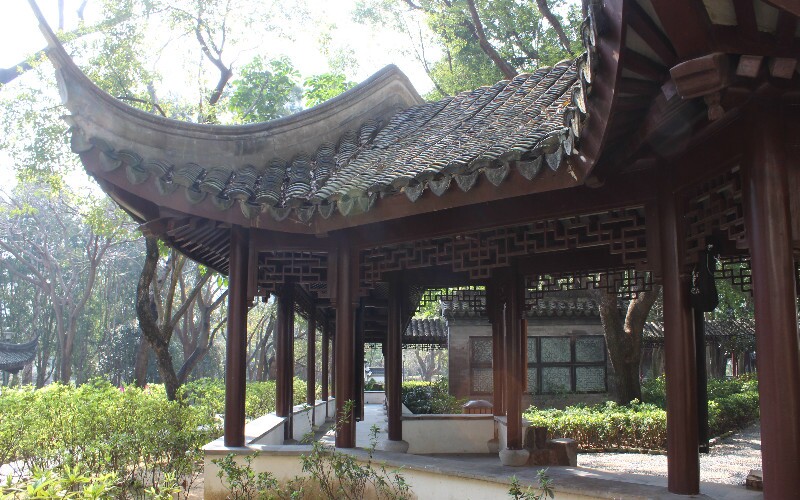 What happens when an urban area has almost no government? Anyone familiar with the pictures and the story of this enclave in Kowloon probably finds the whole story of the little town in Hong Kong territory fascinating. At the town's height, perhaps 35,000 people were living in an area the size of two soccer fields or about 210 meters by 120 meters (700 feet by 400 feet). They lived in small rooms stacked on top of each other, and the stories increased to about 11 or 14 stories. It couldn't grow higher than that because there was an airport nearby and the Hong Kong government forbad taller construction. It is said that most of the people made a living in factories or businesses in the town or outside, and that people who could move out did so, so the city had a disproportionate number of old or sick women and men. Many were drug addicts. There was no sewage system, and the water supply was eight pipes supplied by the Hong Kong government. However, somehow the town kept growing until people were evicted and the town demolished during the late 1980s and early 1990s. The Chinese and Hong Kong governments both claimed jurisdiction of the area, and they agreed to turn the area into a park that was built in 1994 and 1995.

On the top of the building, hundreds of people lived in tents of cloth or cardboard and threw their sewage and trash over the sides. It is said that kids played on the top. The bottom stories received no natural light. Gangs thrived to some extent until the 1970s when police raids and the opposition of people in the city stopped a lot of the crime. The whole drama came to an end when the Chinese government and the British government agreed to demolish the area.

In 1842, Hong Kong Island was ceded to the British, so the Qing Dynasty rulers built a fort on the site. Construction was finished about 1847. There was a defensive wall around the fort, and this is why it was called the "Walled City", but the Japanese tore it down when they occupied the area in WWII. When the Qing Dynasty rulers ceded the "New Territories" area to Britain, the "Walled City" with a few hundred Chinese inhabitants was not part of the area that was ceded. But British troops attacked the fort in 1899. Both governments claimed control of the little walled town after that.

After WWII, the Nationalist government of China tried to assert its right to rule the little town, and thousands of Chinese moved in. Maybe they wanted to escape from being deported from Hong Kong. The British tried to reassert control, but they failed, and then they adopted a hands-off policy. Without outside control, the town grew in the tiny area. By the end, about 35,000 people somehow lived in the space. During the 1960s, Jackie Pullinger came to Hong Kong and tried to help the people in the "Walled City". Her story is inspiring as she led 100s of people to become Christians and scores of drug addicts lost the desire to take drugs.

The Kowloon Walled City Park was built on the original area and was officially opened to the public in 1995. In the park, there is little information about the former town. There is only park garden area, the Yamen (Qing official) building, and artifacts dating from the Qing Dynasty period. The Walled City's Yamen building and remnants of the south gate were declared Hong Kong Monuments in 1996.

In nearby Tsim Sha Tsui, there are four good museums and the Hong Kong Cultural Center. To learn more about Hong Kong history, a good place to go is the Hong Kong Museum of History that is a few kilometers away.