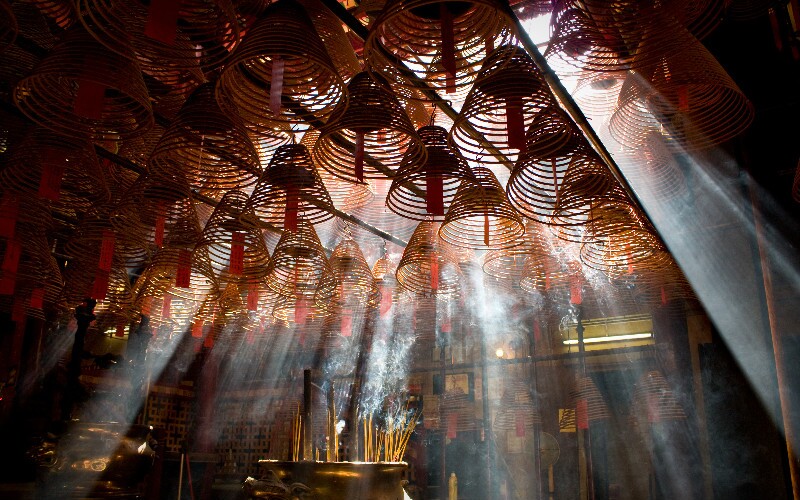 It is the oldest temple in Hong Kong in the Mid-levels area of Hong Kong Island. It is half the way up Victoria Peak. In the temple, two idols are worshiped, the God of Literature and the God of War. It was built in 1847. People go to the Man Mo temples in China to pray for success in examinations or in their academic or literary endeavors. They also go to Man Mo temples to settle disputes. A bronze bell there was also made in 1847. Though it has been often renovated, the original appearance is preserved, and it is visited by lots of people.

It is said that the ceremony for settling disputes between people of cutting off a chicken's head and burning yellow paper originated during the Qing dynasty. In this ceremony, in order to avoid going to court, people invoke the gods to punish people who don't perform the vows that they publicly make in the ceremony.

124 Hollywood Road; in the Mid-levels in the Western District of Hong Kong Island. 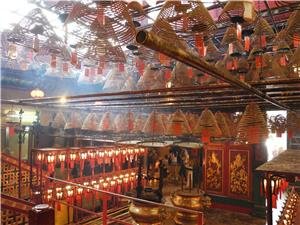 This temple was built by Taoists during the colonial era. One of their gods, the god of literature named Man Cheong, was born in AD 287. The other god, Mo, was born in AD 160. It is said that he fought against oppression and injustice and was killed in 219 at the hands of his enemies. There are other idols there too.

Man Mo Temple has been managed by Tung Wah Group of Hospitals since 1908.

If you want to have a great hike and an opportunity for exercise and see some great views, you can walk to the top of Victoria Peak through the park and jungle above the Mid-level areas above Central.

In the Mid-levels area nearby the escalator, you can also find the Zoological and Botanical Gardens that is a free zoo with mainly primates and small animals.

If you want to learn more about Hong Kong history, you can go to Hong Kong Museum of History, which is about a 25 or 30 minutes' walk away from the Star Ferry docks. The Science Museum is next to it. To get to Tsim Sha Tsui, you can take the subway or the Star Ferry. The four big museums described here are free on Wednesdays.

There is also another Man Mo temple in Tai Po that was declared as a Hong Kong Monument by the Hong Kong government.

How to get there?

Visitors can take No.26 bus at the Landmark on Des Voeux Road Central and get off at the second stop of Hollywood Road and then they can walk to the Man Mo Temple.