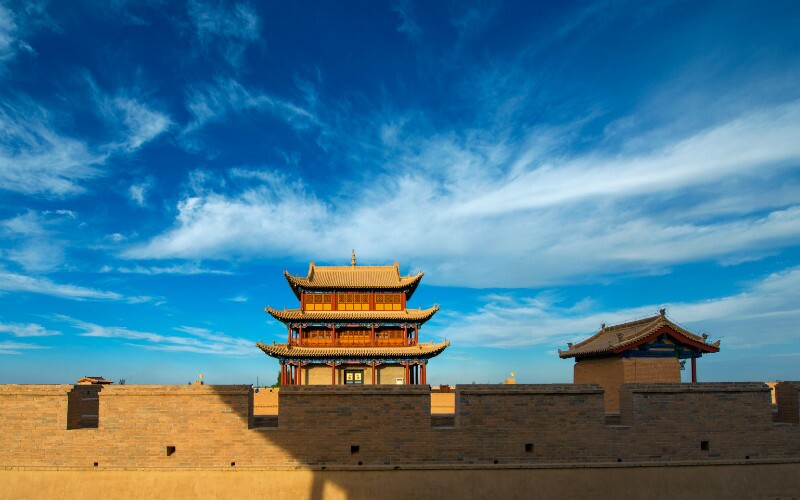 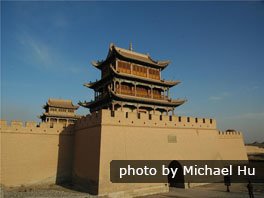 Jiayu Pass is not only the western starting point of the Ming Great Wall, but also a vital pass on the ancient Silk Road. It's the joining place of the cultures of the Silk Road and the Great Wall (along with Dunhuang, which has some Han Dynasty Great Wall relics).

In the Ming Dynasty Jiayu Pass was a vital area for defense against attack from the northwest. The Great Wall was built across this Gobi Desert pass. Jiayu Pass gets its name "the First and Greatest Pass under Heaven" for its strategic, commanding position and grand presence.

Where It Is — the Beginning Point of the Great Wall

Jiayuguan is in the Gansu Corridor, northwestern China, on the ancient Silk Road.

The Great Wall at Jiayu Pass got its name for being built at the foot of the Jiayu Mountain. The Great Wall First Abutment is 10 km (6 mi) southwest of Jiayuguan City center, while the Great Wall Fort is about 8 km (5 mi) to its north. Jiayu Pass is located at the narrowest point of the western section of the Gansu (Hexi) Corridor.

The Great Wall at Jiayuguan was began by Feng Sheng, a Ming Dynasty officer in 1372 (the fifth year of Emperor Hongwu's reign), nine years earlier than Shanhai Pass at the opposite end of the Great Wall. The whole construction lasted 168 years from 1372 to 1540.

In 1873, Zuo Zongtang, the governor of Shanxi Province, was reclaiming the territory of Yili in Xinjiang. When he went passed Jiayu Pass, impressed by its magnificence, he wrote down the inscription "天下第一雄关" on a tablet, meaning 'the First and Greatest Pass under Heaven', which enhanced its solemnity and magnificence. 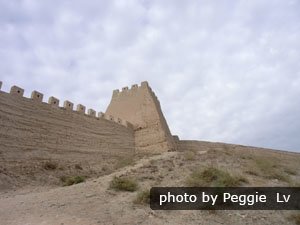 Built with Loess: In the Gobi Desert, Jiayuguan's Great Wall is not like other famous sections near Beijing, which are built with grey bricks and big stone slabs. This section is mainly built with loess. The loess soil was tamped together in layers, making the wall very solid. Each layer is 14 cm thick on average. The wall outside the fortress is one of the highest remaining parts at about 6 meters high.

Jiayuguan's fortress is quite impressive, especially considering its barren surroundings. There is a two-storey watchtower on each corner. It has a bailey with three storied-buildings with three-tiered gable-and-hip roofs, inner and outer walls, two gatehouses, a moat, and beacon towers. The bailey has a perimeter of 640 meters and an area of 25,000 square meters.

Jiayu pass is surrounded by towering mountains to the south and desert hills to the north, and an isolate dgroup of hills to the west, protecting a desert valley area about 15-kilometers wide. In the south of the valley, the Great Wall ends on the edge of the Beida River gorge, a natural barrier. Together with the Great Wall across the valley, the fort was an impregnable military defense system. So it deserved its name: "the First and Greatest Pass under Heaven".

There is a spring in front of the Jiayuguan fortress, which forms an oasis. The spring is one of the reason why the fortress was built there. 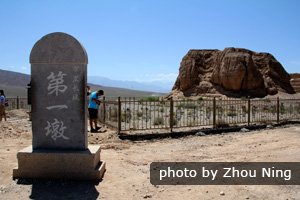 The First Strategic Post of the Great Wall is also known as Taolai River (a.k.a. Beida River) Pier, built in 1539 by Li Han, an official of Suzhou in northwest Gansu Province. It's the western starting point of the Ming Great Wall and an important part of the Jiayu Pass defense system. 7.5 kilometers south of the fortress, it stands 50 meters from a 80-meter-high river cliff. It's known as "The First Strategic Post under Heaven" (万里长城第一墩).

The Hanging Great Wall in Shiguan Gorge is 8.4 km north from Jiayu Pass. This Great Wall fortification was built by Li Han, another official of Gansu's Suzhou, in 1540 (the 19th year of Ming Emperor Jiajing). Partially overhanging the north of the gorge, it seems like a hanging arm, so it's also known as "the Badaling of the West".

Best Time to Visit — May to October

May–October is the best travel period for Jiayuguan. In January the temperature can drop to -28°C! In July, the hottest month, the temperature can reach 38°C, but the pass is usually much colder with cold air rolling down from the Qilian Mountains. There is a big day-night temperature difference.

People usually travel Jiayu Pass together with other places in a Silk Road Tour. If you are not interested in Silk Road tour, you need to get to Jiayu City first.

Get to Jiayu City

There are airport and train station in Jiayu City.

There are public buses (bus 4, 6) to the Jiayu Pass Fort Tourist Area.

Bus 6 (1 yuan; last bus from the scenic area 7pm) takes the Lanxin East/West Road (兰新东西路 Z120) east-west road through the north of the city to Jiayuaguan Fortress Scenic Area. If your hotel is near that road, you could use this bus..

The bus stops are about 1 km east of the fortress. You can walk in or take the shuttle bus, which costs 10 yuan.

Jiayu Pass is a vital pass on the ancient Silk Road. Most travelers who travel Silk Road will visit this pass. If you are planning a Silk Road Tour, please see our 12-Day Beijing, Luoyang, Xian, Tianshui, Jiayu Pass, Dunhuang, Turpan and Urumqi Tour.

Your Tour Can Be Tailor-Made

if the above tour is not what you're looking for, just tell us your requirements and interests, and China Highlights will help you design your Jiayuguan Tour.

The tourist areas are about 10 km from the city center. You should spend at least a night in one of Jiayuguan's 3–5-star city-center hotels.

The restaurants mainly offer mutton and noodles. Some restaurants cook Sichuan-style food, which is very spicy. With recent tourist development, you may also find cuisines from other places.

Jiayuguan Jiayuguan Travel Guide - How to Plan a Trip to Jiayuguan