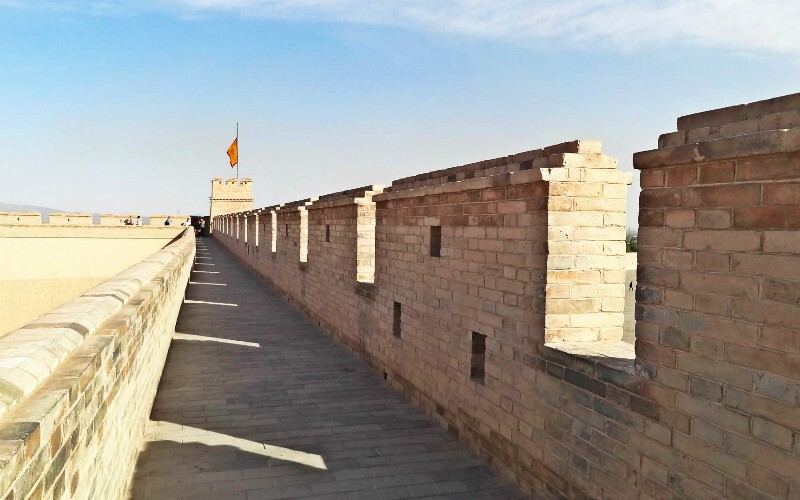 The city of Jiayuguan is located in the Gansu Corridor in central north China. It sits on the southern edge of the Gobi Desert with the snowy Qilian Mountains to its south. The city has a continental desert climate: dry, cooled by the mountain air, with big temperature differences.

The city is at an altitude of about 1,700 meters (4,900 ft) above sea level. The altitude is not high enough to start feeling the effects, so even older travels will be comfortable in the city.

Over the whole year, the average temperature in Jiayuguan is 7 °C (44 °F), and the annual and diurnal variation in temperature big.

The area only gets an annual rainfall of 80 mm (3 in). The area gets sunshine in abundance, because it rarely rains. This rainfall usually happens mostly in the summer months. The evaporation on the other hand is 2,149 mm (85 in), much of this coming from runoff from the Qilian Mountains.

The city of Jiayugan does get some snow in the winter months, but on average there are only three snow days per month. This means it is not a big concern for travelers to the area. The frost free period of the year lasts 130 days (May–September).

Since it is in the Gobi Desert, the city of Jiayuguan can experience some dust storms. The record highest wind speed for the month of August was 87 km/h (54 mph). January, July, and October all have maximum recorded wind speeds of 72 km/h (45 mph). However, the average expected wind speed per month is generally closer to 7 km/h (4 mph).

Based on when weather of the area is most favorable, the best time to visit Jiayuguan is from the month of May to the month of October. Winter and early spring are very cold in this area, so it is best to visit during the late spring, summer, or autumn.

The most important thing to remember when packing for a trip to Jiayuguan is that the temperature can change quite drastically between day and night. To prepare for the difference in temperatures, you should pack both warm clothes and light clothes. You can never go wrong with layering to keep your body comfortable.

If you are going during the summer, remember that July is the hottest part of the year in Jiayuguan, so bring sunblock and other measures to protect your skin. The wind in this area is very strong, especially in November and December. If you choose to visit during those months, be sure to bring a scarf or hat. You should also bring sunglasses to protect your eyes from the long hours o