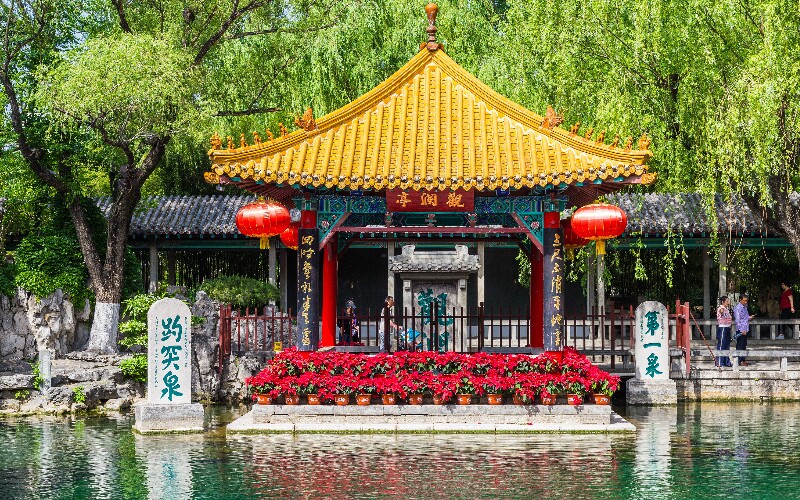 Baotu Spring Park is located to the west of Quancheng Square and to the south of Wulongtan Park, with its north gate across from the business street “Longquan Road”. It is a park characterized by springs. Baotu Spring is the symbol of Jinan, the Spring City, known as one of the three major attractions in Jinan together with Mount Qianfo and Daming Lake.

The water of the spring is divided into three strands, spouting day and night to a height of tens of feet at its best times. The so-called Baotu means spouting. The water temperature is always about 18°C (65°F) all the year round. In winter, the water vapor floats over the water, looking like a layer of thin fog.

The spring water surges out from the underground limestone caves. The flow amount can reach 240,000 cubic meters a day, and it can be as high as 26.49 meters in elevation.

Its formation has something to do with the topographic structure in Jinan. To the south of Jinan is a piece of mountain land, where Shandong's famous Thousand Buddha Mountain（千佛山） stands; to the north is the plain, and Jinan lies in the adjacent area to the mountain land and the plain.

The mountain land there is composed of limestone and there also are magmatic rocks under the earth of the plain. The limestone was formed about 400 million years ago, and it is very pure in texture, leaning to the north from the south at about 30°. The limestone is not very compact, with cracks, crevices and caves that can store and carry the groundwater. Along the leaning limestone, large amounts of groundwater run to Jinan, forming the resource of Jinan's springs.

The magmatic rocks under the earth of the plain are very compact in texture. So the groundwater is stopped when meeting with the magmatic rocks; the water cannot flow out freely through the watertight clay stratum on the rocks. The large amount of stopped water surges out from the underground crevices and, with the strong pressure, forms those famous springs. The Baotu Spring is the most famous one among those springs.Besides, there are a lot of old buildings around the Baotu Spring that are worth looking at.

Cultural Activities by the Baotu Spring

Every year in late September, when the springs are vigorous, the Spring Cultural Festival is held, which lasts about ten days. During this time, there are traditional opera performances, folk-custom activities, painting and calligraphy work exhibitions, acrobatic feats and other cultural arts.

The most rain in Jinan falls in July and August, accounting for over half of the annual rainfall. There isn't much rain in the other months.

Other Popular Attractions in Jinan