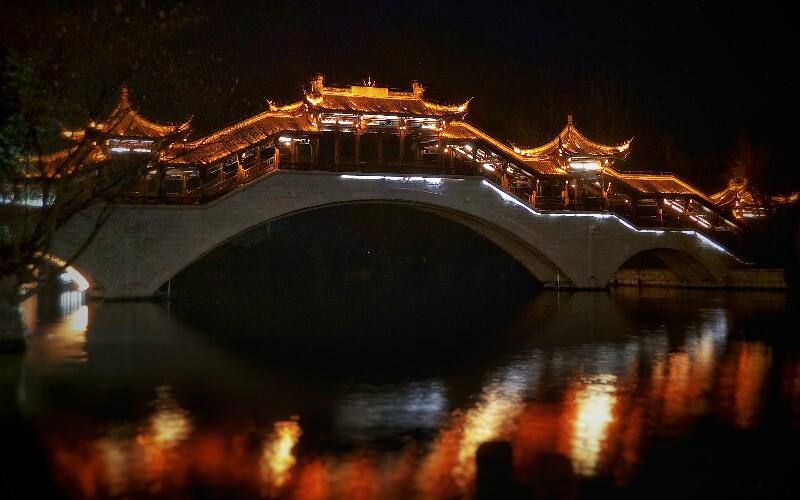 The World Cultural Heritage site of Tai'erzhuang Ancient Town is at the center of the Beijing–Hangzhou Grand Canal, nestled in Tai'erzhuang, Zaozhuang City, Shandong Province (actually at the intersection of Shandong, Jiangsu, Anhui, and Henan Provinces), and it boasts of being the most beautiful water town in China.

Tai'erzhuang Ancient Town boasts 18 ponds and 15 kilometers (9 miles) of streets and lanes along the waterways, as well as old ferries. A boat trip can be taken to tour around the town.

Tai'erzhuang was awarded the title of “the First Town on the Earth” during Emperor Wanli's reign in the Ming Dynasty, due to its burgeoning social and economic status, resulting from the Beijing–Hangzhou Grand Canal changing its course to the town.

At the same time, the unique style of Tai'erzhuang Water Town was formed due to the clash and interaction between South China culture and North China culture.

However, Tai'erzhuang Ancient Town was ruined completely during the Battle of Tai'erzhuang, which broke out in the spring of 1938.

Tai'erzhuang was rebuilt on its ruins in 2008, and numerous war relics remained after the Second World War, which is why it has been awarded the title of one of the World Cultural Heritage war sites along with Warsaw, Poland.

The north Zaozhuang section of the Beijing–Hangzhou Grand Canal is unnavigable, and most cultural relics have disappeared along this route.

The south Zaozhuang section has been extensively modified since 2008, but it still cannot compare with its old days; therefore, Tai'erzhuang has become the only town of Zaozhuang Prefecture to display the original appearance of the Beijing–Hangzhou Grand Canal.

Qianfu Village fully represents the lifestyle of the residents of the Ming (1368–1644) and the Qing (1644–1911) dynasties, where lots of ancient streets, lanes, embankments, water gates, and architectures are well-preserved.

As a water town in ancient times, Tai'erzhuang Ancient Town has numerous temples, churches, and pavilions along the river, including Wenchang Pavilion, Mt. Tai Goddess Temple, and Mazu Pavilion.

In addition to appreciating various kinds of cultural museums and bridges, different intangible heritage cultural performances can be enjoyed in the town.

Dozens of folk performance sites are dotted throughout the exhibition halls and squares of Tai'erzhuang Ancient Town. The highlights include the Emperor Qianlong Visiting Tai'erzhuang Town Show, the South Shandong Shadow Puppet Show, Qin Shu (storytelling in the form of ballad songs with a musical accompaniment), Liuqin Drama, and the South Shandong Drum Performance. The movie Bloody Tai'erzhuang Battle is projected in Yiqian Square each night.

In addition, many tourist boats are also available in Tai'erzhuang Ancient Town, which can be classified into two kinds: the well-decorated pleasure boats and cockle-boats.

A pleasure boat can hold up to 35 people, while a cockle-boat can only hold 10 at most. It is extremely enjoyable to explore the beauty of Tai'erzhuang Ancient Town by boat while listening to the boatmen singing and telling the legends of the town.

High-Speed Rail: Most travelers take the Beijing–Shanghai Railway to Zaozhuang Railway Station, 70 kilometers from Tai'erzhuang, and then take one of the following to get to Tai'erzhuang Ancient Town:

2. Take a taxi for about 200 yuan from Zaozhuang West Railway Station to Tai'erzhuang Ancient Town.

China Highlights can arrange transport to Tai'erzhuang Ancient Town from these airports or stations.

In the Ancient Town

Over 30 hotels, hostels, and motels are available within Tai'erzhuang Ancient Town, each of which is different from the others in architectural style, price rate and supporting facilities. The hotel prices range from 100 yuan per room to 500 yuan per room each night.

Near the Ancient Town

Want a trip to Tai'erzhuang? China Highlights can help arrange a tour for you with a knowledgeable, English-speaking guide. Contact us and tell us what you would like to do.