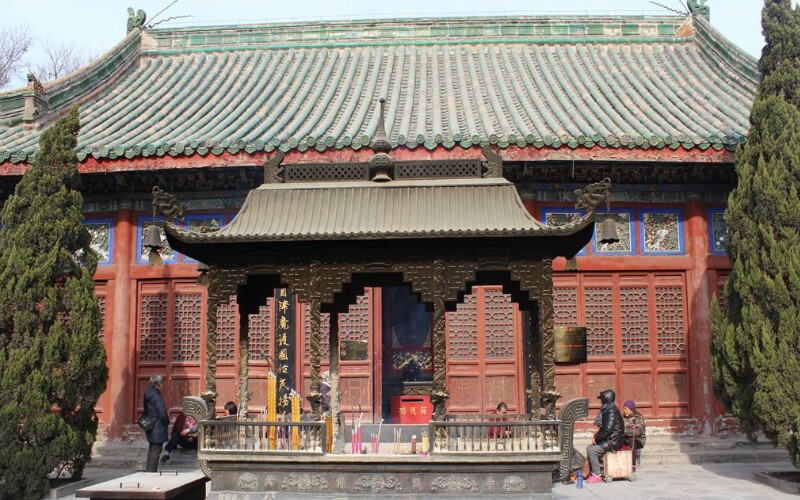 Da Xiang Guo Temple is located on the west part of Z I You Road in Kaifeng.

In the first year of Chang'an of Tang Dynasty (701 A.D.), a monk called Huiyun arrived in Kaifeng. He said that there were evidences of anima here. So he begged and collected money to buy lands and build the temple. When building the temple, the name board of Jian Guo Temple of Northern Qi Dynasty was dug out. As a result, the temple continued to be named Jian Guo Temple.

The main buildings are Tian Wang Dian (Hall of the Celestial Kings), Da Xiong Bao Dian (the Great Buddha's Hall), Ba Jiao Liu Li Hall (a hall with eight angles and roof made of colored glaze), Phra Mondop (depositary of Buddhist sutra) and so on.

Tian Wang Dian (Hall of the Celestial Kings) has 5 rooms and 3 doors cornices and roof made of yellow glaze tiles. In the center, there is a statue which is a seated Maitreya Buddha with kind facial expressions and honest smiles. He is sitting on a lotus platform. It is said that he is the Buddha of the Future who will come into the man's world as the successor of Sakyamuni (the founder of Buddhism) 240 million years later. On both sides of Maitreya Buddha stand the Four Heavenly Kings.

North of Hall of the Celestial Kings is a garden with rockeries, quiet and elegant. Further north is the main hall: Da Xiong Bao Dian (the Great Buddha's Hall). The hall is solemnly built, with carved beams and painted rafters. The Great Buddha's Hall is rounded with bluestone banister, on which tens of lively and vivid little lions are carved. There is no statues of the gods or Buddha now. However, there often are some exhibitions of cultural and historical relics and works of art.

Going out of Da Xiong Bao Dian (the Great Buddha's Hall), people will see Luo Han Dian (Arhat Hall), which is also known as Ba Jiao Liu Li Hall (a hall with eight angles and roof made of colored glaze). Being a cloister-style building with eight angles, the structure of it is quite unique and rare seen even in the world.

There is a statue group in the cloister of the hall, whose theme is "Sermon of Sakyamuni". The 500 Buddhist arhat are all vividl shaped, with different positions and facial expressions. In the center of Luo Han Dian (Arhat Hall), there stands a wooden pavilion with eight angles, in which is a wooden statue of Guanyin (a Bodhisattva named Avalokitesvara). The Guanyin has four faces facing four different directions, with about a thousand hands and a thousand eyes. It is 6.6 meters high.

It was carved by skillful craftsmen with a ginkgo tree during the reign of Emperor Qianlong in Qing Dynasty. The Guanyin faces four directions, with 6 big hands and over 200 small hands in every direction. Altogether, there are more than a thousand hands. There is an eye (a mind which perceives both past and future) in the palm of each hand. Therefore, there are over a thousand eyes. That is why this statue is called "Bodhisattva with A Thousand Hands and A Thousand Eyes".

Phra Mondop (depositary of Buddhist sutra) is in the back part of the temple. This is a two-storey building with carved beams and painted rafters, looking magnificent. Now, this building is used as a part of Kaifeng Painting and Calligraphy Institute. There are calligraphic works and paintings of various styles both upstairs and downstairs for visitors to appreciated and buy.

In the east corner of the temple stands a pavilion where a bronze bell is hung there. Casted in 1768, this bell measures 2.67 meters in height and more than 5000 kilograms (over 5 tons) in weight. It is a precious cultural relic of the temple.