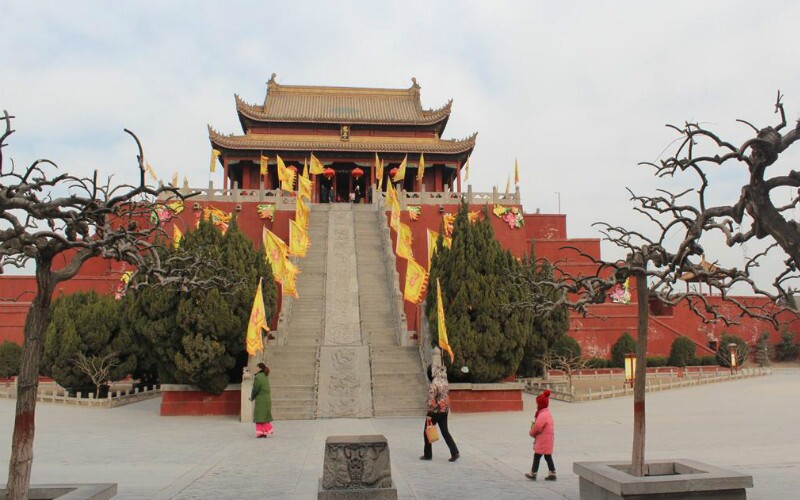 In central Kaifeng City, there is a big park called Dragon Pavilion Park (Long Ting Gong Yuan, 龙亭公园). It is said that it was a temple for worshipping the emperor of the Qing Empire. The original base was built in 1692, but the wooden structure on top was probably refurbished if not reconstructed more recently because Kaifeng suffered several periods of major devastation since then from flooding and wars.

The red base and especially the white stairway leading up to it is reminiscent of a Central American or Mexican stepped pyramid. It is said that the current park sits on the site of the imperial palaces of 6 different empires. The last dynasty with a palace here was that of the Jin Empire (1115-1234). Other then the building, the main attractions are the big ponds, a Song Dynasty wax museum, and a flower show.

The modern park is mostly water. There are two big ponds called Panjia Hu and Yangjia Hu. These two big ponds are separated by a narrow corridor of land. If you want, you can walk up the 72 white steps to the building platform and look around. Dragon Pavilion Park is the main venue of Kaifeng Chrysanthemum Show held for a month from about October 18 to November 18 each year. There is a also a wax musuem with figures of characters of the Northern Song Dynasty (960-1127). Kaifeng was the capital of this empire.