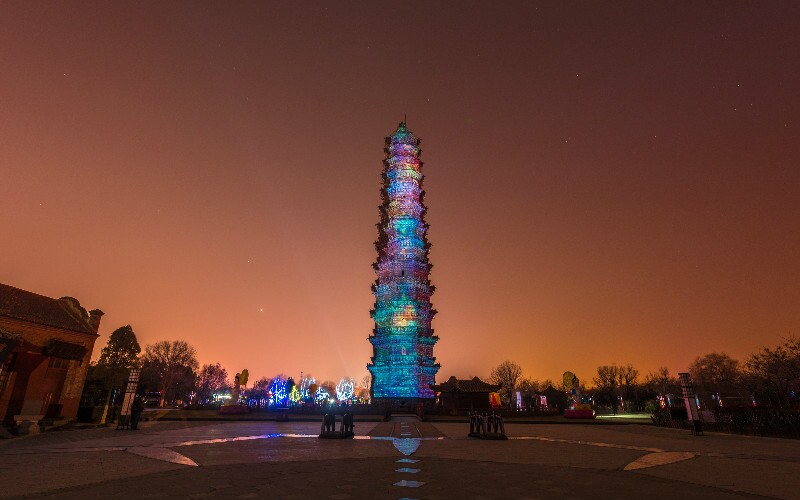 Perhaps the best ancient structure to see in Kaifeng is the Iron Pagoda. It isn't made of iron but bricks. It has a dark color like iron. It has been called the Iron Pagoda for hundreds of years. It was built in 1049 by a Northern Song Dynasty emperor when a tall pagoda that was made of wood was hit by lightning in 1044. He ordered the new building of brick to be constructed in its place, and the tower has stood the test of time having survived floods and numerous earthquakes.

It stood next to a temple that was destroyed in 1841 when the Yellow River overflowed and the city of Kaifeng was flooded. The thousand year old temple collapsed, but the towering pagoda survived and stood firm. The tower isn't hollow like other pagodas. It has a solid core with a inner stairway going around the side. It is intricately ornamented and tall.

On the building, you can see a lot of different pictures of Buddhist images and mythical characters. It is one of the oldest and largest buildings with glazed bricks and tiles in China. The building is 186 feet tall. For comparison, the Leaning Tower of Pisa that was finished in the 14th century is 183 feet tall. Like the Leaning Tower of Pisa, this tower leans slightly.

Emperor Renzong (1022–1063) of the Northern Song Dynasty built the pagoda in 1049. It was placed on the list of major historic and cultural sites under state protection in 1961. Now, it is considered one of China's best pagodas for its size, preservation, and history.

The pagoda is in a big park that is called Iron Pagoda Park in northeastern Kaifeng. The park measures about 50 hectares and there is a pond in it. There are two octagonal pagodas and a big Buddha figure around it. The park is one of the famous parks in the country. There are a lot of trees to enjoy. There is a pond that is about 300 meters long. The pagoda is the most eye-catching element of the park.