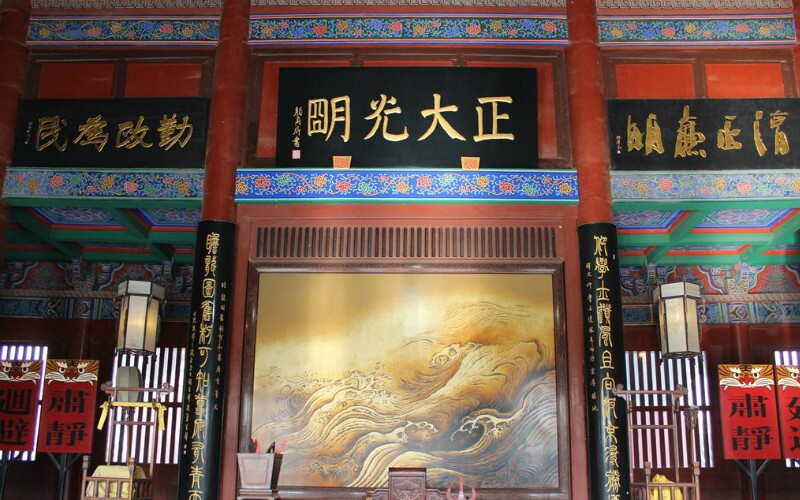 Kafeng Fu (Kaifeng Prefecture) is in the northern band of the east lake of Baogong Lake in Kaifeng.

Having a long history, Kafeng Fu (Kaifeng Prefecture) is well-known both home and abroad. It was the capital and the most important prefecture of the whole country in Northern Song Dynasty. The large-scale buildings are magnificent, dignified and elegant. Many historic celebrities like Kou Zhun, Fan Zhongyan, Bao Zheng, Ouyang Xiu had once served as procuratort of Kaifeng Prefecture. Especially when Bao Zheng was the prefect, he enforced the law strictly and was impartial and incorruptible. His good reputation lives till today. An opera describing Bao Zhen’s achievements when he was the prefect of Kaifeng Prefecture is still popular today, sounding touching and soul-stirring.

The rebuilt Kaifeng Prefecture today covers an area of over 60 mu (about 4 hectares, with the florr area of 13.6 thousand square meters (1.36h hectares). Kaifeng Prefecture looks solemn, and spectacular and in great harmony with the Baogong Temple by the west lake of Baogong Lake. This is called “West Prefecture and East Templs”. The green and rippling lake adds more beauty to the buildings.

Wen Cheng Qiang (Wall of Culture): There are exquisite sundials, Gao Biao, water clocks, time bells, time drums here. These equipments shows that as early as Song Dynasty, people in Kaifeng Prefecture uses these equipments to get to know the time.

Tian Qiang Lookout Area: A luxurious Taoist temple is built here. In San Qing Hall, You Sheng Hall and Fu You Hall, there are frescos about stories telling how people in Northern Song Dynasty believed in Taoism. The whole yard is a huge stage of the Eight Diagrams (eight combinations of three whole or broken lines formerly used in divination).

Fu Si West Prison Scenic Spot: There are prison warder’s room, Temple of the God of Prison, dead cells, jail cells for males and females and so on. According to the real history of Northern Song Dynasty, each kind of rooms are quipped with statues, instruments of torture and scenes that show the real condition of prisons at that time. It is a epitome of the prison culture of Norther Song Dynasty.

Yamun Culture Scenic Spot: This scenic spot is composed of Ming Yuan Drum (a drum people beat at court to lodge a complaint against some injustice), Jie Stone (a stone tablet on which inscriptions are incised to alarm officials), and the court. The court is where prefect of different dynasties held court trial. Jie Stone stands in front of the court, on which there incised inscriptions of Emperor Taizong of Song Dynasty.

Education and Imperial Examinations District: This is where disciples in Northern Song Dynasty had their Xie Shi (local exams) and organized their lectures temporarily. In the yard, the star of wisdom was enshrined. Every day, a performance of “Bang Qian Zhuo Xu” (meaning picking a son-in-law in those who have their names on the list of successful candidates) is put on show at regular time.

Bus 1, Bus 4, Bus 16 and Bus 20 fron the central city of Kaifeng has a stop at Kaifeng Fu (Kaifeng Prefecture).