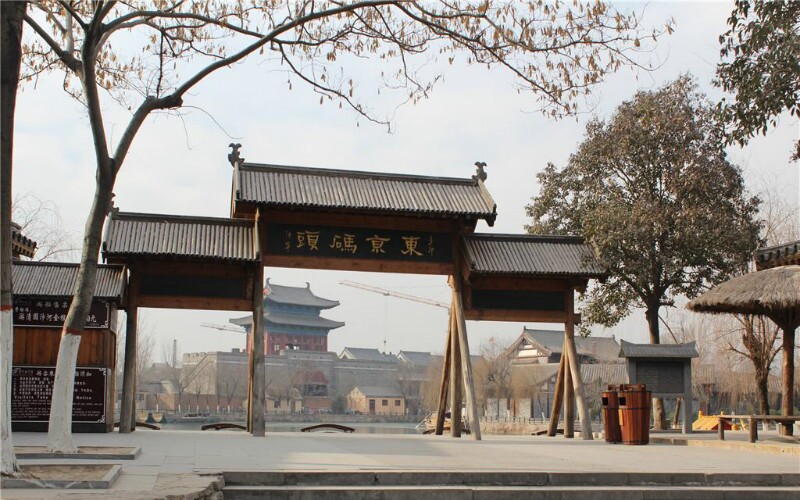 Millennium City Park or Qingming Riverside Landscape is a historical and cultural theme park which recreates "Riverside Scene", an outstanding and world-famous painting work by Zhang Zeduan, a well-known painter in the Northern Song Dynasty (960–1127).

When you step into the park, you will feel like you are traveling back the flourishing Song Dynasty. Large and grand ancient Song-style buildings and staff wearing ancient Chinese clothes make the park full of ancient charm and elegance.

The whole park is arranged exactly like the original layout of Riverside Scene in the Song Dynasty. People can see the Jiu Lou ('wine buildings', like restaurants today), teahouses, pawnshops, and the manufacture of Kaifeng embroidery, mandarin porcelain, new year pictures, and so on.

Abandoning blandness and seriousness, Millennium City Park expresses the passion and thriving nature of the Song Dynasty through its buildings and performances, creating an entertaining and unique atmosphere. More than 20 performances are provided for you everyday to experience the life and customs of the Song Dynasty.

Here is the program of Millennium City Park performances:

The Great Song Dynasty - Reminiscences of the Eastern Capital

The Great Song Dynasty - Reminiscences of the Eastern Capitals is a large scale live action performance, which is enacted by hundreds of actors, creating a fantastic and magnificent effect, and making people feel like they are living in the prosperous Song Dynasty. It is the must-see performance not only of the park, but also of the whole ancient city of Kaifeng.

The performances are divided into 9 parts: songs of 8 beautiful Chinese Song poems, and a lifelike picture of "Qingming Festival by the Riverside" by Zhang Zeduan. The stage, including Jinglong Lake in the Royal Garden of Millennium City Park, the pavilions, bridges, and corridors on the water, is one of the highlights of this performance, as well as the gorgeous lighting.

The Action Performance on the Water

Special access is provided for those physically challenged. Wheelchairs, baby carriers, crutches, and umbrellas are available to rent.

Dongjing Night Market is open all day. More than 20 restaurants can meet your demand for different kinds of snacks. Among the restaurants, Sun Yangzheng's Shop is famous for characteristic Kaifeng food and has a large capacity of more than 300 people.

Surrounded by water on three sides, with more than 20 rooms and complete facilities, Yizhan Hotel is a good choice. Hourly rate rooms and halls for entertainment are available.