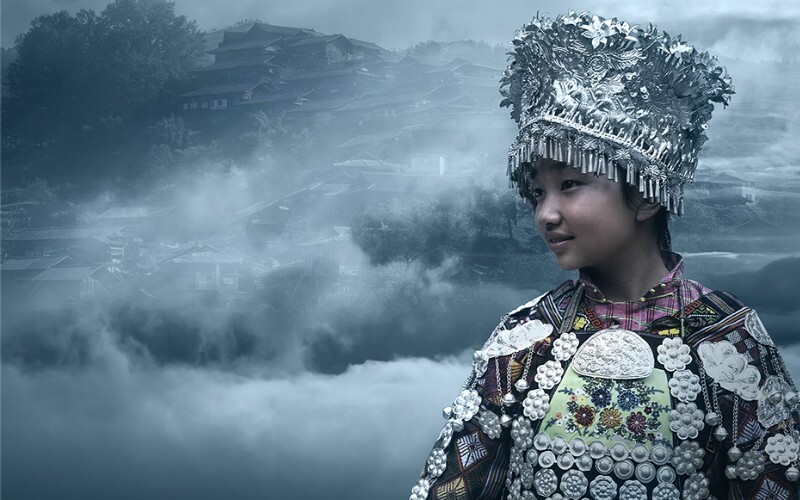 Datang Short Skirt Miao Village (or Datong for short, no pun intended) is about 15 kilometers from Leishan county town, which in turn is 45 km south of Kaili.

Datang stands out from other Miao villages in the region for the distinctive short skirts worn by its females; as short as 10 centimeters (make that "short!") in some instances. (They also wear leg wraps, however, up to over the knees.)

Origin of the Short Skirts

More than 600 years ago, the Miao women and girls of Datang began to wear the "miniskirt" for which they have since become renowned. In those days of the Ming dynasty (1368-1644 AD) females throughout the realm were expected to cover practically every inch of their bodies – nothing should be exposed to a man's view.

The reason for Datang's "miniskirts" can only be surmised. Were they an act of defiance, predating the Women's Liberation movement in the West by about half a millennium? The world is waiting for an answer.

A Girl in Datong.

Datang women and girls are different, not only from women of other Chinese ethnic groups, but also from other Miao women elsewhere.

The most extraordinary thing about their dress is that the females of Datang wear their short skirts all year round, even in freezing winter.

The sight of "miniskirts" is no longer unusual for Westerners, but it has only become common in Chinese cities over the last two decades. Before, modesty prevailed in Chinese dress-code. For centuries, Datang women somehow managed to buck the trend.

The Miao people of Datang are friendly and hospitable. Maybe you can enjoy some spicy sour fish soup in company of a family there.

In Datang you can still see many little barns for storing grain, standing above water, out of reach of rats and fire; not to mention many wooden stilt-houses on the slopes, traditional among the Miao.

China Highlights can help you customize a trip to Kaili and then on to Datang. There are other interesting places to visit nearby. You can reach Kaili by bus within two hours from Guiyang airport or city.