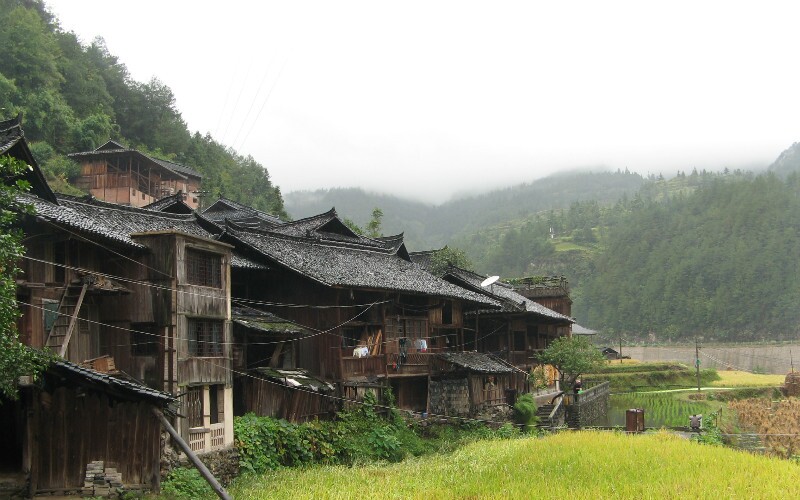 Jidao is a Miao village about 25 km from Kaili city in Guizhou. Although not far from the city, the village is not very well known, so you can hardly find much information about it online.

Partly because of this, Jidao has remained immune from the tide of commercialization affecting many other villages, and still preserves its traditional lifestyle.

Now follow me for a glimpse of this idyllic village. It is equally divided into two parts, Shangzhai (Upper Village, with its back to the mountains) and Xiazhai (Lower Village). Most of its attractions are found in Shangzhai.

“Blocking-the-way” wine is the traditional welcome of the Miao ethnic group, also in Jidao. Unlike in other Miao villages, people hosting the ceremony are not young girls but venerable old ladies.

When you arrive, the ladies sing welcome songs and toasting songs, and pour the rice wine into your mouth. The wine is made by local people and it’s ok to drink a cup or two, if you like it.

Read about other interesting ethnic customs in Guizhou.

Walk Around the Village on the Hundred-Year Path

Walking on, you will find a flat path covered with crushed slabs extending deep into the village. Locals call this the hundred-year path.

There are about 170 households, living on the hillside in traditional wooden houses on stilts. You will not find rows of shops or restaurants, for the village is not commercialized. There are many old granaries and ancient trees. People still wear traditional clothing and practice hospitable Miao culture.

People in Jidao belong to a branch of the Miao minority called the “Black Miao”, for their clothing is usually dark blue or black. They are also called “Long-Skirt Miao”, for In contrast to the Miao women in some other villages, who wear very short skirts, women in Jidao are known for their long skirts.

In Jidao, you may have a chance to witness a performance of ancient folk songs.

The soulful songs are performed by elderly people without accompaniment. They cover every aspect of their life, including history, love, work, and customs, an encyclopedia of the local Miao people. You may ask your guide to explain the meaning of the songs.

In the past, the Miao people had no writing system, so Miao ancestors recorded their history and legend by song down through the generations.

Today, however, along with some other folk customs, the ancient songs are facing a crisis of possible extinction, for young people mostly choose to leave the village for study and work. It’s a good idea to seize the opportunity to admire this disappearing folk art while you can.

Would you like a taste of local Miao food? Here in Jidao, you can taste authentic Miao dishes, including Miao king fish (green pepper and fresh fish), sour-soup fish, chicken, pickled fish and pickled meat. If you are interested, just tell your guide.

The Miao people love their festivals. At festival time, the women dress up with silver headdresses and lots of silver jewelry. Jidao has a village square where visitors may watch the locals dancing and singing. The Miao people are renowned for their traditional song and dance.

Find out more about the ethnic festivals of Guizhou.

You can visit Jidao at any time of year, but the best time would probably be during the warmer months between March and October. During this period, the nature around Jidao is at its best, and you may have opportunity to join some lively festivals.

Visit Jidao and the people live there

You will not find large crowds of tourists in Jidao, for it is less famous and commercialized than other villages. Now is a good time to visit this isolated village.

China Highlights can help you customize a trip to Jidao from Guiyang or Kaili, You may check some itineraries samples including Jidao:

Send us your requirements to modify the tours above, or check out other existing Guizhou tours.