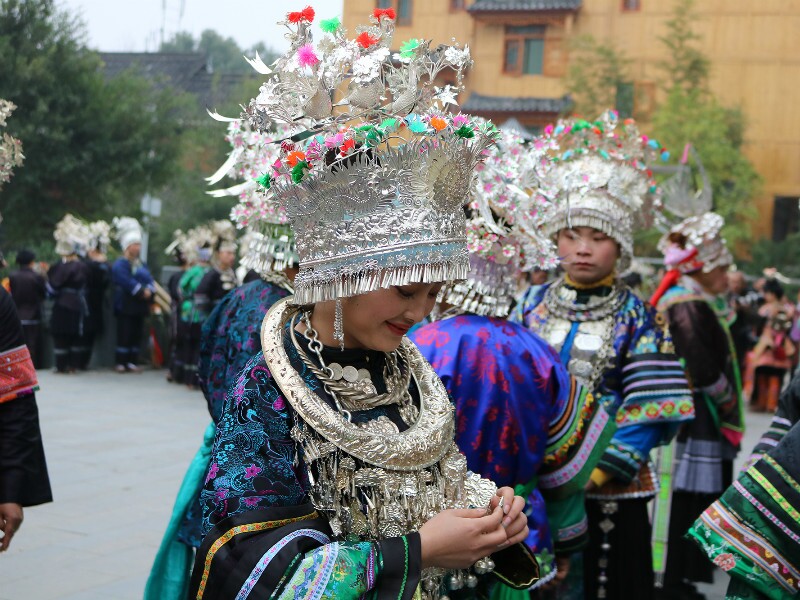 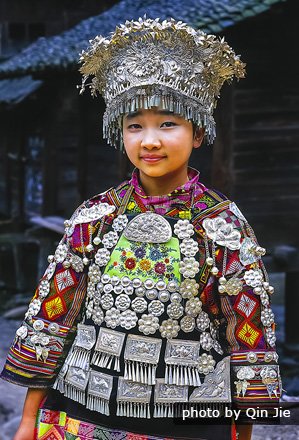 The Miao village of Qiannan (Kaili) is one of a number of traditionalist ethnic minority villages in the southeast China province of Guizhou. This little village gains its fame from the continued manufacture of homemade clothes and costumes in accordance with the ancient methods of the past. Many tourists enjoy stopping by Qiannan to learn firsthand of the process of spinning, weaving, dying and sewing these colorful and beautiful garments and to have the opportunity of taking some home with them as souvenirs.

The Miao (also called the Hmong) are listed among China's 55 official state minority groups and have their main China-side population center in Guizhou Province. Others live throughout Southeast Asia and in the West. They are among the 37 ethnic minority groups that are scattered throughout this province and have developed long-standing local traditions in their various villages.

Qiannan villagers have had 1,000 years to perfect their textile manufacturing techniques, and they have meticulously done so from seed to finished product. In family homes, women spin and weave and dye the cotton cloth in cedar-plank vats, leaving it to soak for a full month in indigo water.

Along the way, they sing the "Cotton Song" which commemorates each step of the process: finding cotton seed, selecting the seed, cultivating the land for cotton, sowing, reaping, removing the seed from the cotton, making thread, spinning, dyeing, weaving cloth and sewing the traditional cotton garments.

Tourists can actually watch these clothes being made in the same essential manner they have been made for centuries.

The Scenic Beauty of the Qiannan Area

Situated in a province 90 percent covered by mountains and hills and hidden in a secluded forest interspersed with canyons, waterfalls, and meandering rivers, it is no surprise that not only culture lovers but nature lovers as well frequent this tiny Chinese village.

There are a number of official scenic areas nearby, including Xiaoqikong and Shuichun River Drift. Mandarin Duck Yuanyang) Lake and the winding waters of the Jianjiang River add to the natural beauty that surrounds Qiannan Village.

Location and Best Time to Visit

The village is located 23 km (14 mi) to the southwest of the town of Kaili. It is most easily accessible by first arriving in the provincial capital, Guiyang, by air and then taking a train or bus to Kaili. From there, one can catch a taxi to the village.

Although the temperature is relatively mild all year long, it is best to avoid the monsoons in June, and the early Spring festival season stands out as the best possible time to visit. The February 16th to 19th Lusheng Festival features Miao cultural events such as singing, dancing, bull fighting, and horse racing.

There are a number of other Miao minority villages in the vicinity which also offer their own glimpse into the cultural practices of the Miao people. Qingman and Datang villagers are known for wearing long skirts, living in wood stilt houses, and dressing in elaborate costumes and silver headdresses. Jidao Village is known for its folk songs and its blue-stone roadways. Shiqiao Village still manufactures paper in the ancient manner, utilizing the roots and bark of trees. And 60 km (30 mi) to the south of Kaili, the Langde Miao Village contains the famous Wind and Rain Bridge in the midst of its mountain paths.

In Kaili City, one should not miss the handicraft and food markets, and he or she might want to check out the pagoda and shrine in Dage Park and the beautiful Yudong Karst Cavern. Besides the Springtime festival mentioned above, there are over 100 festival held in Kaili at various points during the year, and almost no matter when one chooses to visit, he can probably find a way to attend a few of them.

kaili Kaili Travel Guide - How to Plan a Trip to Kaili