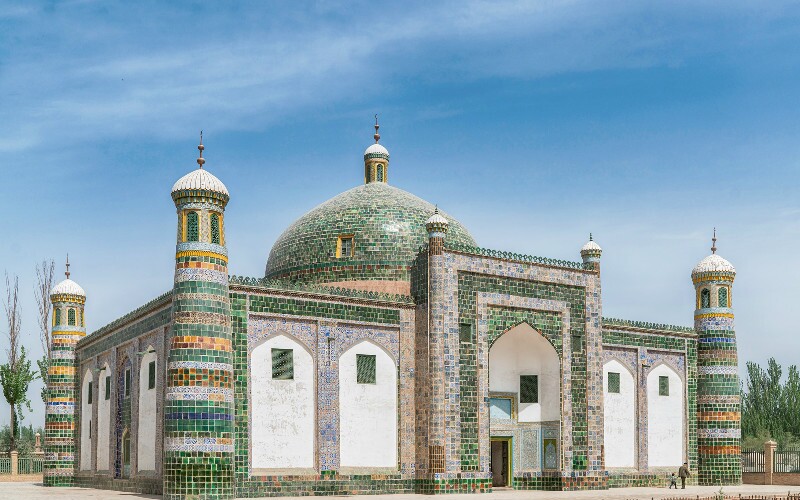 Abakh Khoja Tomb is a famous attraction in Kashgar. It's also known as Xiangfei Tomb, named after an emperor's beautiful concubine during the Qing Dynasty. It is in the northeast suburbs of Kashgar at Haohan Village, around 5 kilometers away from the city. The grand tomb is heavily sheltered by the ancient poplar trees which grow around the mausoleum.

The tomb served as the family tomb of Abakh Khoja, the powerful ruler of Kashgar in the 17th century who was revered as a prophet and second only to Muhammad. It was first built in 1640 and contained 72 members belonging to five generations of the family.

It's said that Emperor Qianlong's favored concubine – Xiang Fei (1734–88) – is also buried there, which is why the tomb is also called Xiangfei Tomb.

Of the 72 royals in the tomb, the most famous resident is Xiang Fei (‘Fragrant Concubine’). She was Emperor Qianlong’s concubine in the Qing Dynasty. After her death, the heartbroken emperor had Xiang Fei carried by royal caravan all the way back to her hometown. The site is, therefore, well-known among the Chinese as Xiangfei Tomb.

Xiang Fei, whose real name was Iparhan, was from the Uyghur minority, which is predominantly Muslim. It's said that she was very beautiful and born with a natural fragrance. Emperor Qianlong loved her very much and she was the only Uyghur concubine.

There are many different legends about Xiangfei Tomb.

Others say that because Emperor Qianlong loved her so much, he fulfilled her request to have her body sent back to her hometown, which she missed. A procession carried her body back to her hometown in a sedan, which is displayed in the Abakh Khoja Tomb. Therefore, people think that Xiangfei Tomb is her actual tomb.

The mausoleum features beautiful examples of ancient Islamic architecture. You can appreciate the beautiful wood carvings of the mosque and halls of worship. There is a big white mulberry tree inside the courtyard. The fruiting period lasts from May to October. You can take some fruit for free if you want to.

The lower one is small and can only accommodate about 10 people, but it's cool during the hot summertime. The upper one is very beautiful with fine wood carvings on the pillars. Although the colors are fading, you can still see the carvings and paintwork.

Juma Mosque is a large church where many important religious activities take place. Muslims from the southern region of Xinjiang Province go there for liturgy before they go to pray at Abakh Khoja Tomb each Friday or during important religious festivals.

It is famous for the 62 unique pillars, which were carved by 62 different masters. Each pillar has its own unique pattern, carvings, and paintwork. It's a representative example of Uyghur carved wood art.

In the north part of the mausoleum, there is a doctrine-teaching hall that’s topped with a green dome. The building complex is majestic and mosque-like with dome-topped buildings, minarets, and wooden fences integrated harmoniously.

A mazar (Arabic) is a mausoleum or shrine of a Muslim saint, like Abakh Khoja. The tomb chamber is beautifully decorated with green and blue glazed brick on the walls. In front of the tomb chamber, there is a small rose garden with a variety of roses.

The top of the dome is covered with bright glazed tiles. At each corner of the tomb base is a huge column with a diameter of 3.5 meters. At the top of each column is a small minaret with a crescent symbol. The ceiling of the chamber is decorated with delicately colored patterns and Arabic words. Inside the chamber, there is a staircase leading to the top.

There are 72 tombs belonging to the Abakh Khoja family in this tomb chamber. You can see different shapes and sizes of tomb inside it. Every tomb was covered with a colorful sheet. The shape and size of each tomb was different according to the different ages, genders, and statuses of those who were buried inside them. For example, a big tomb with stairs indicates that it was for a man with a higher status than others. A small tomb without stairs might indicate that it belongs to a young man.

For more information about the mazar culture, you can travel with us and listen to your local guide's introduction.

Travel to Abakh Khoja Tomb with Us

If you want to visit Abakh Khoja Tomb and want to find out more details about the legends and the shrine culture, travel with us! We can help you tailor-make a tour according to your interests and requirements. Or you can see our popular tours below for inspiration: