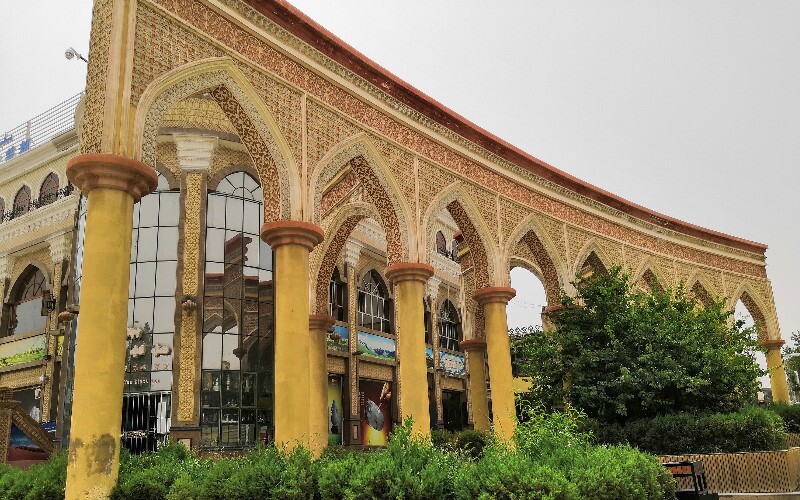 Art Street, with its colorful local features, is probably the most interesting street in Kashgar.

The branches of the Great Silk Road once led through many important cities in the western mountains and deserts of ancient China, but one of the last locations along this famous trade network before leaving what today is Chinese territory is the city of Kashgar. This oasis town sits near the westernmost outcropping of the Chinese border in Xinjiang and is a point of cultural contact with the peoples of Central Asia.

In the center of the city, the Sunday Market held on Ancient Art Street (also known as Wustanbowie Handicrafts Street) brings a million tourists a year to sort through its huge array of unique and exotic goods. To enter the Old City area in general is to take a hundred-year step back in time and to experience the distinctives of Uyghur and other local culture.

Right next to the Id Kah Mosque and passing by the Kashgar central square, Ancient Art Street is a gathering point for craftsman and salesmen from all Kashgar and the surrounding countryside. Its more than 4,000 trading stalls, farmers' markets, flea markets, and livestock and meat markets stretch on for more than a full kilometer (about six-tenths of a mile), and it is the largest marketplace in all of Central Asia.

For over 2,000 years Kashgar was a crucial link on the famed Silk Road and an economic and cultural exchange point between China and Central Asian lands. The Old City still retains its thatched and mud-brick homes and narrow alleys and streets which give us a glimpse of earlier days, though modern city developments are rapidly diminishing its size. Hundreds of old-style workshops and other reminders of the past still linger in this town that seems almost a living museum.

As an important point of interchange between China and Central Asia, Kashgar served as a flourishing trade spot in ancient times. Since the Tang Dynasty (618–907), the city's cultural and economical dominance gradually declined and was finally abandoned in the Qing Dynasty (1644–1911). Yet, this ancient trading hub retains vestiges of its outpost ambience, as is reflected in Art Street.

Kashgar was once a center of Zoroastrianism, and then of Buddhism, but now it is a predominantly Islamic city. Most of the inhabitants are Uyghur and carry on both the cultural and religious traditions of their forebears. It was once a flourishing center of trade, then was for a time abandoned, but today is a populous but isolated town with a heavy agrarian flavor.

Getting There and When to Go

Despite its isolated location, there are constant bus, train, and air connections to Kashgar from Urumqi, over 1,300 km (800 mi) to the northeast. Once in town, it is easy to catch a taxi or walk to Ancient Art Street which is right in the downtown area.

Due to its extreme desert climate, it is not ideal to travel to Kashgar during the blazing and bone-dry summer months of June through August nor in the chilly winter months of December through February. However, the time of ripened fruits and festivals to celebrate the harvest is in August, and it would be worth it to bear a little late summer heat for the chance to attend the activities.

Make sure to prepare appropriately for this sunny, hot climate and to bring something warm to wear at night when desert temperatures drop drastically. Also, since Kashgar is one of the driest cities on earth, receiving only 65 mm (2.5 in) of rain a year, you will want to always have a water bottle handy.

What Else Can I Do While In Kashgar?

Besides the market, one should take a stroll through People's Park downtown, note the 18-m (59-ft) tall statue of Mao Zedong, view the Id Kah Mosque (largest Mosque in China), see the Apak Hoja Tomb (holiest Muslim site in Xinjiang), take a trip to nearby Patuo City with its ancient imperial palace, and drive through the length of the fruit-laden Valley of Kashgar. Additionally, it would be fun to take a trip on a local camel and to experience local cultural events.