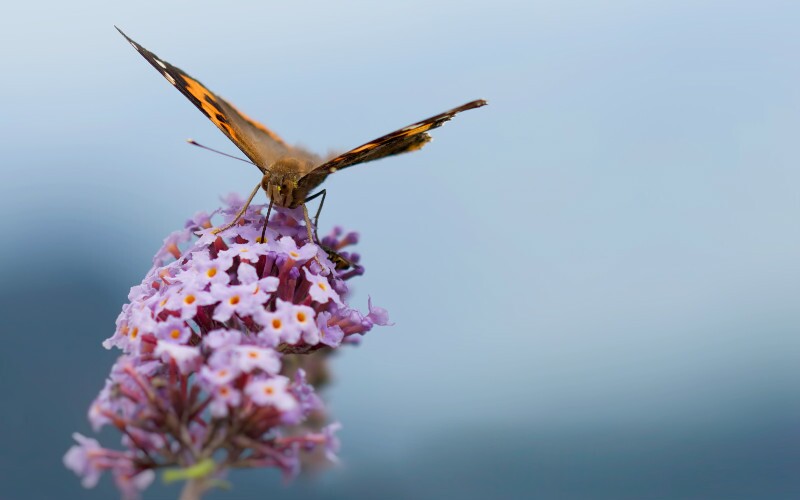 Far to the west, in Xinjiang (Sinkiang or "Chinese Turkestan"), an amazing event takes place every year. Tens of thousands of bright red Chinese butterflies descend upon a remote valley at the rim of the Tianshan Mountains for a two-week feast on the ripened mulberry trees. This valley witnesses one of the most highly acclaimed gatherings of butterfly life on the planet and has become a major tourist attraction.

The Beauty of Butterfly Valley

Few sights astonish the eye as effectively as does the view of a carpet of red wings spread out over the foliage of this remote valley on the edge of a vast desert. The sea of red arrives in the middle of May and flies off at the beginning of June. This is then the time for the tourists to schedule their arrival in the valley as well, not forgetting of course to bring cameras with plenty of film.

The valley is filled with mulberry, apricot, walnut, poplar and elm trees along with a an undergrowth of interesting plant life. The high mountains of the Tianshan can be seen, and the air is cool compared to the fierce Summer heat in surrounding areas.

Birds sing in the branches of the tall forest, snow-melt brooks meander the valley floor, and hikers traverse its paths in search of a snapshot of the red butterflies and a taste of the mulberries that brought them there.

Transport and When to Go

The valley is in Quhui town in Hoxud County, 140 km (85 mi) from the city of Korla and 400 km (240 mi) southwest of Urumqi. As the bird flies, it is only 200 km (120 mi) from Urumqi, but the need to circle southward around the Tianshan doubles the distance by road. The daily bus from Urumqi to Korla takes six hours, and the daily air route takes just half an hour. From Korla, a taxi, rental car, or tour bus can bring you to the valley.

Consider that the valley is in a desert region, and you can understand that the extreme temperatures of Summer and Winter are not the best travel dates. This is a land that sees 57 mm (2.2 inches) of rain a year and yet has an evaporation rate of 2,800 mm (110 inches)! The best time to go as to weather is Spring and Fall, and since most will want to be there when the butterflies are present, one should plan on mid-May to June.

Other Attractions in the Area

The town of Korla is well worth exploring. It has been inhabited since about 200 B.C.

and holds many historical sites of interest such as Tiemen (Iron Gate) Pass which once guarded the route of the famous Silk Road. The pass was well fortified and protected the entrance to a natural 30 km (18 mi) route through the adjacent highlands- it is located 7 km (4 mi) north of town. Korla also boasts fame for its fragrant and delicious pears.

Three other garrisons are located in the general vicinity: Kuga, Khotan, and Kashgar Garrison. These were once used by the Tibetan Empire, Kuqa (Kucha) later to be utilized by an Uyghu r Empire. The ruins of the city of Subashi also make a fascinating stop.

The ethnic minorities in the area, primarily Uyghur, Huis and Mongolian, live in the midst of the modern Han Chinese majority, but they still retain their own traditions and don't mind to let tourists have a chance to learn about them firsthand. You can expect to find local cultural activities like folk dances, archery contests, sheep and cock fighting matches, and more to attend.