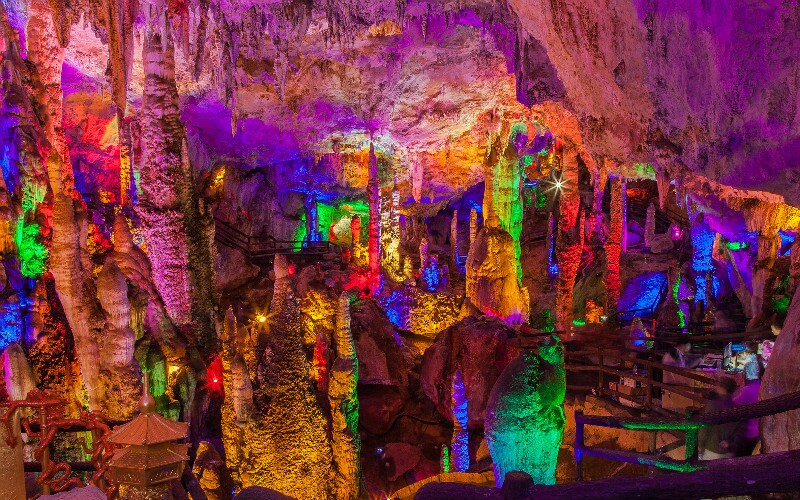 The Alu Ancient Cave, reputed as the first wonderful cave in Yunnan Province, features an underground karst cave landscape which looks like an upside down stone forests. It is one of the most magnificent natural caves in Asia.

The Alu Ancient Cave is actually a large complex of grotesque limestone cave groups, which once served as the settlement for one of the wild tribes. It has been reputed as the number one wonderful cave in Yunnan Province, one of the most magnificent and exquisite natural wonders and the palace of underground stone forest garden. It is composed of nine peaks and eighteen caverns. These caves have many specific and strange characteristics, like spring running out of cave, deep river flowing in the cave, long tunnel zigzagging along the cave, sky seeing through the cave. The Alu Ancient Cave is the main cave of the whole scenery, which consists of Dongyuan Cave, Yuzhu Cave, Biyu Cave and Yuzhu Cave.

The Alu Ancient Cave was shaped and developed several hundred million years ago. When the old sea in now Yunnan and Guizhou provinces rose and became the land, the massive calcareous material in the sea turned gradually into limestone. Hundreds of thousands of years witnessed the development of caves of different sizes and the formation of today’s marvelous sight.

Transportation: There are travel shuttle buses directly accessing to the Ancient Alu Cave Scenic Spot, or travelers can arrive at the Stone Forest first and travel eastwards about 80 kilometers (50 miles) to the gate of the Ancient Alu Cave. It is about 3km from the county to the scenic spot. Taxis are easy to catch.

The best time to travel: from March to April and from September to December