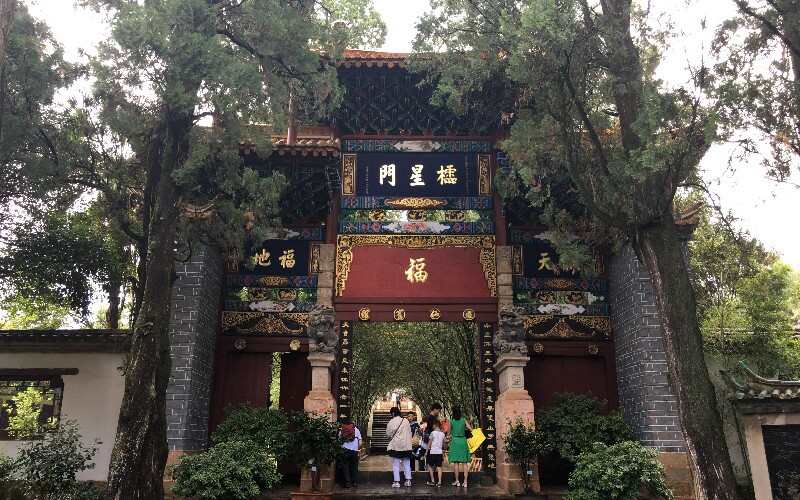 The Golden Temple (Jin Dian) is a famous Toaism temple in Yunnan Province. The entire temple was built from bronze, which makes it glitter like gold in the shining sun. This is why people gave the temple its name, the Golden Temple.

The Golden Temple is also known as Taihe Palace (Hall of Supreme Harmony) or Tongwa Temple (Bronze Tile Temple). Located on the charming Mingfeng (Singing Phoenix) Hill, about 15 kilometers from the east Kunming urban area, the temple is the largest one in China ever built from bronze. The temple was first built in 1602 during the Ming Dynasty (1368–1644), imitating the design of the Taihe Palace in Wudang Mountain in Hubei Province. In 1637 (the end of the Ming Dynasty), the temple was moved to the top of Tianzhu Peak (天柱峰, which is why Tianzhu Peak is also called Jinding: Golden Top) in Jizu Mountains (鸡足山, the Buddhist shrine in Yunnan Province) in Binchuan County for political reasons, leaving the foundation bed and railings. However, the temple on Tianzhu Peak was damaged in the 1960s. The Golden Temple on Mingfeng Mountain has now been rebuilt under the order of Wu Sangui (1612–1678, the Satrap of the West China in the Qing Dynasty which lasted from 1644 to 1911), and has been well kept until today. 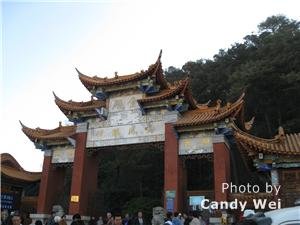 The temple hall is 6.7 meter high, weighs 250 tons, and is the largest copper architecture in China. All of the beam columns, doors, windows, roof tiles, Taoist statues, wall decorations, the banner near the gate and couplets, and so on, are made of bronze. The burnished bronze gleams like gold under the shining sun, and makes the temple the most famous Taoist shrine in Yunnan Province.

Like most Taoist temples, before approaching the temple visitors must climb hundreds of winding stone steps on the mountainside and get through three “Heavenly Gates,” which are highly decorated with well-painted archivolts and carded beams and rafters. The stone steps are surrounded by beautiful scenery, and while climbing the stone steps, visitors feel a sense of inner harmony as they integrate themselves into the beauty of Mingfeng Hill.

At the end of the path sits a miniature city wall built with Lingxing Gate (the gate leading to the temple) and battlements. Inside Taihe Palace, numerous historical objects are on display. Among these objects is a double-edged sword with the Big Dipper engraved on it and that weighs 20 kilograms (44 pounds). Legend has it that this is the magic sword of Zhen Wu, a Taoist deity who guards Mingfeng Hill. Another broadsword with a wooden handle is said to be the saber of Wu Sangui, and weighs 12 kilograms (about 24.5 pounds). Behind the temple are planted a camellia tree (signaling the approach of spring every February with its hundreds of exquisite blossoms) and a lagerstriemia indica tree (with a long flowering phase and gorgeous blossoms). These trees, over 600 years old, add more energy to the quiet temple.

China Highlights can help you customize a tour to visit the Golden Temple and other highlights in Kunming.