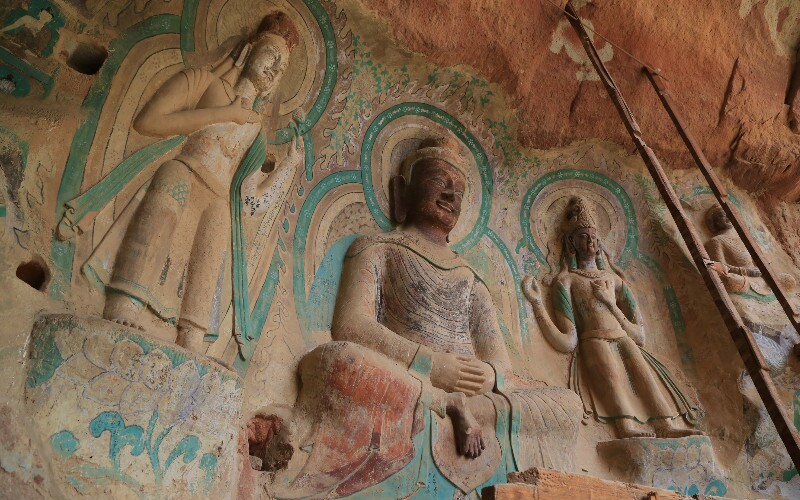 Bingling Grottoes（炳灵寺）is hard to get to from Lanzhou, but it is one of China's big ancient Buddhist temple complexes with an array of statuary and frescoes dating from about AD 420 to the Ming Dynasty. The statues date from various dynastic eras and show the differing cultures, clothing and physical features of the worshipped gods. The earliest temples are at the highest elevation and have characteristic Indian-style features and artistic style.

Monks and Buddhists coming from Central Asia along the Silk Road probably stamped the idols with Central Asian and Indian Buddhist culture. So you can see typical Indian-style hand gestures and poses. The statues and art were carved in natural caves or hewn grottoes in a canyon along the Yellow River.

One of the highlights is a 27-meter-tall (88 feet) sitting Buddha that is about 1,200 years old. The difficult travel makes getting there something of an expedition, and there are several fees for private transportation and entry to the sites and you may have to do some negotiation. But if you are interested in Buddhism or ancient construction, then this is one of the best ancient sites in China.

The history of the Bingling Grottoes is tied up with the history of the Silk Road. The Han Empire (206 BC – 220 AD) rulers ruled over China's first long-term empire. It was deeply Confucian, and three major religions were Taoism, worship of local gods and ancestors, and Confucianism. It is said that early Han Dynasty rulers wanted trade and allies and sent Zhang Qian as an emissary to western countries two times about the year 100 BC. The Han Empire succeeded in opening trade on the northern Silk Road routes that passed through the region of the Gansu Corridor.

It is said that a Han Emperor named Mingdi had a dream of a golden figure, and his advisers said that the figure was the Buddha who was the god of the West. In 68 AD, Mingdi sent Cai Yin to Central Asia to learn about this religion. The main religion of Central Asia was Buddhism. Cai Yin brought back Buddhist scriptures and two Buddhist monks. Buddhism became popular, and people built the big ancient Buddhist temple sites associated with the Silk Road at the Bingling Grottoes, Mogao Grottoes and the Zhangye Giant Buddha Temple during the next thousand years. The Western influence can be seen in the style of the ancient sites. The people near the Silk Road accepted Central Asian and Indian Buddhist teaching.

It is said that the earliest carvings at the Bingling Grottoes site were made about the year 420 AD in natural caves at the top of the site. They were made during the time of the Northern Wei Dynasty (368-534). The big Maitreya Buddha at the bottom of the site near the water level was made during the Tang Dynasty (618-907) when Buddhism and monasteries became very powerful in the Tang Empire. Near the end of the Tang Empire in 845, Tang Dynasty rulers turned against Buddhism and destroyed thousands of Buddhist temples and monasteries.

In the following dynastic eras, many more grottoes and Buddhist shrines were carved in this canyon of the Yellow River. The name Bingling is a transliteration of the Tibetan name for this complex. During the Yuan Dynasty (1271-1368) that was the Mongolian dynasty of China, Tibetan Buddhists carved many grottoes in the lower part of the site.

In order to control the Yellow River that used to cause natural disasters and to generate electricity, the government decided to build dams. In 1969, the government completed the Liujiaxia Dam that formed the largest body of water in Gansu called the Liujiaxia Reservoir. When generators were put into operation, the dam became the country's biggest hydroelectric power station. About 200 of the grottoes or Buddhist sites were flooded. The big Maitreya Buddha of the Tang Dynasty barely escaped the water. It is now protected by a wall. At the top, there is still a Tibetan Buddhist monastery. One monk has lived there for more than 30 years.

There are other Silk Road related sites and other sites of interest in the region. In Lanzhou itself, you can see White Pagoda Park. To learn about the history of the Silk Road, there is the Gansu Provincial Museum. You could also do a tour of other ancient Silk Road sites westwards to Xinjiang.

The city of Dunhuang is at the western end of the valley and was also at end of the Great Wall of China that once stretched all the way from Beijing. Near Dunhuang are the Mogao Grottoes that are sometimes called the "One Thousand Buddhas Caves". It is a UNESCO World Heritage Site and is said to be among the largest and best preserved Buddhist grottoes in the world. Much of the area is closed off though.The ancient sites in the Hexi Corridor mainly relate to the Silk Road era. The Silk Road breaks into three branches at Dunhuang, and Urumqi, Turpan, and Kashgar are travel highlights further west.

The Labrang Lamasery isn't from the Silk Road era. It was built in 1709. It is a Tibetan Buddhist temple complex about 6 hours south of Lanzhou. It is one of the six largest temple complexes and schools of its sect of Buddhism.