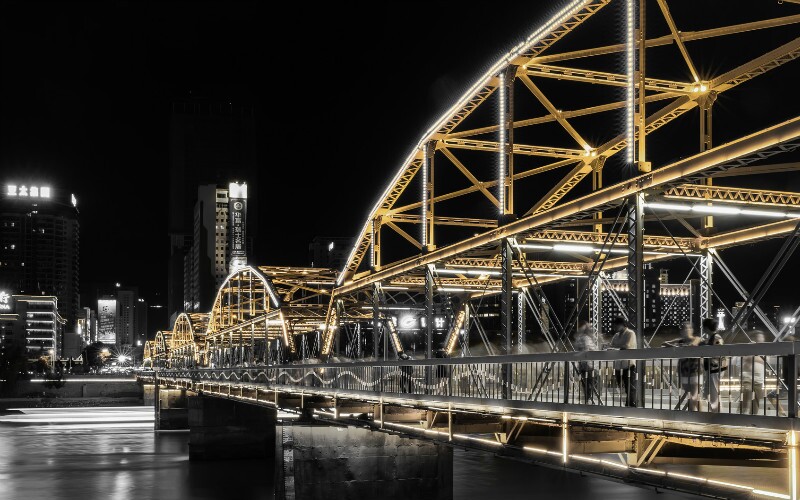 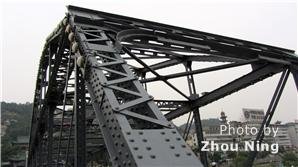 Also known as Yellow River Iron Bridge, Zhongshan Bridge is at the foot of the White Pagoda Mountain, and it was built in the 33rd year (1907) of Emperor Guangxu’s reign in the Qing Dynasty (1644-1911); it is awarded the title of “the First Bridge over the Yellow River”.

Under the sponsorship of Peng Yingjia (the governor of the Lanzhou Prefecture) and Sheng Yun (the governor of Gansu Province), the Qing government spent 306,690 taels of silver on “the First Bridge over the Yellow River”. It was contracted to be built by the German Shangtailai Company and was called “Lanzhou Yellow River Iron Bridge”, and it was renamed as Zhongshan Bridge in memory of Sun Zhongshan (Sun Yat-sen, the first president of the Republic of China) in 1942.

Zhongshan Bridge is 234 meters (768 feet) long and 7.5 meters (25 feet) wide with six piers and five bridge openings, on the top of which five arched steel-structured girders span. In order to hold “the First Chinese Silk Road Festival”, Lanzhou municipal government funded an 806-square-meter (8,676-square-feet) waterside square to be built on the north part of Zhongshan Bridge. On the south part of the bridge stands a monument of 5.5 meters (18 feet) tall and 1.5 meters (5 feet) wide, on whose body is carved with the inscription of “the First Bridge over the Yellow River”; on the reverse side of the monument is carved the inscription of “the Record of the First Bridge of the Yellow River”. The top of the monument is carved with the pattern of “the Two Dragons Playing with a Pearl”.

In addition, a number of places of interest are near Zhongshan Bridge, including the White Pagoda Mountain, Danxia Physiognomy, and the Statue of the Yellow River Mother and the Ancient Silk Road.