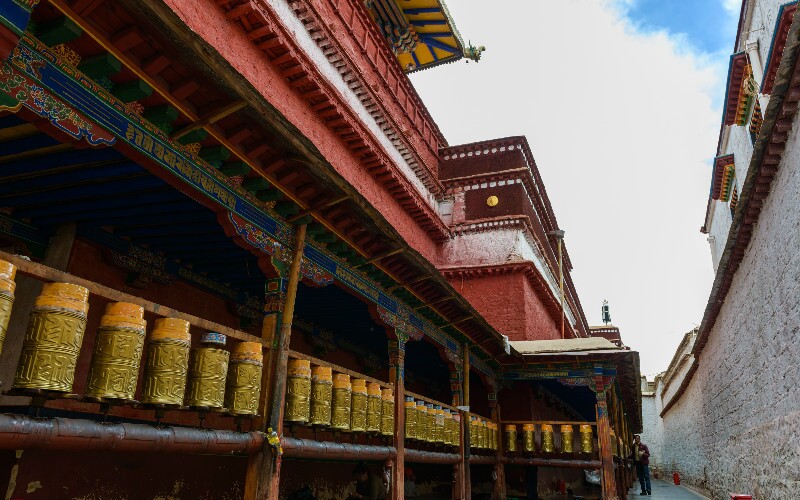 Ramoche Temple is second only to Jokhang Temple in religious importance in Tibet, and is often called "Little Jokhang Temple".  It is located in North Lhasa City, about a kilometer from the Jokhang.

Ramoche has a long history, and was founded at the same time as the Jokhang. Throughout history it has suffered destruction by fire and the Mongol invasion, and has been rebuilt several times.

In the days of King Songtsan Gampo (617-649), founder of the Tibetan Empire, Ramoche Temple was originally built to house the famous statue of Sakyamuni, now found in the Jokhang, which was brought to Tibet by Princess Wen Cheng.

Legend has it that when Princess Wen Cheng and her entourage arrived at the north gate of Lhasa, her carriage got stuck in the mud. Her assistants could not remove the statue and so they covered it temporarily with 4 pillars and white brocade.

Later, the Princess ordered the construction of Ramoche as a shrine for the statue.

Twenty years later, in 652 AD, the leader of Tibet was concerned with rumors that the Chinese Emperor was considering an invasion of Tibet.

As a protection, he moved the Sakyamuni statue from Ramoche to the Jokhang, and hid it from view. It had remained there ever since.

In exchange Ramoche Temple received a smaller bronze statue of Sakyamuni, which was brought to Tibet by Songtsan Gampo's other wife, the Nepalese Princess Chizun. This can still be seen at Ramoche Temple today.

If you are looking to go sightseeing in Tibet, check out our top Tibet tours and add Ramoche Temple as the attractions when booking if it is not included. All our tours are customizable. We can also create an expert itinerary from your requirements.