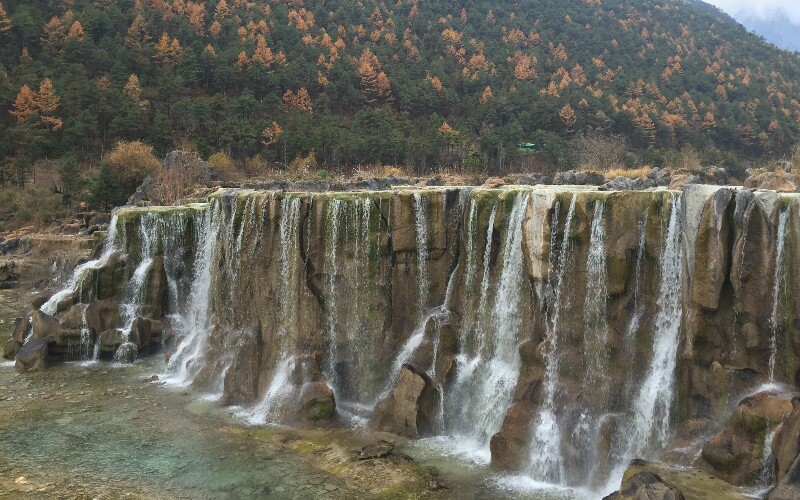 There are numerous white stone terraces in Baishui River, from which the water flows elegantly in small cascades, and it's just like an imaginary world that's really refreshing to visitors.
Baishui River first impresses visitors with its clearness; it is fed by numerous small springs that originate from melted snow on the Jade Dragon Snow Mountain, and you'll feel icy cold when wading cross the river, even in summer.

Baishui River also impresses visitors with its beauty and religious aura, along whose banks the exuberant trees stretch for miles. In the distance, the snow-capped mountains complement their reflections in the water.

Baishui River flows eastward quietly under Baishui Bridge, and it meets Heishui (Black River) before emptying into Heibaishui (Black and White Water) River. Heishui River gets its name because most of the pebbles in its riverbed are black. According to Dong-Ba Scripture (the Naxi people's bible), the Naxi ethnic people are inclined to explain everything in the universe on the basis of a ‘black and white principle' owing to their special affection for Heibaishui (Black and White Water) River, who believe that the order of the universe lies in the harmonies of black and white, and Yin and Yang.

Baishui River is close to the cable cars to the Jade Dragon Snow Mountain – both the Large Cable Way and the Small Cable Ways are located nearby, with only a few minutes' walking distance.

After descending from the Large Cable Way – most travelers choose this cable way as it reaches the highest peak of the snow mountain – travelers can take a free sightseeing car or walk to Baishui River. The scenery on the way is fantastic. The river is quiet with far less travelers than the mountain; however, it is quite worth a visit. On clear days, you can have a great view of the snow mountain. 40 minutes are enough to travel around the river and take in the scenery.