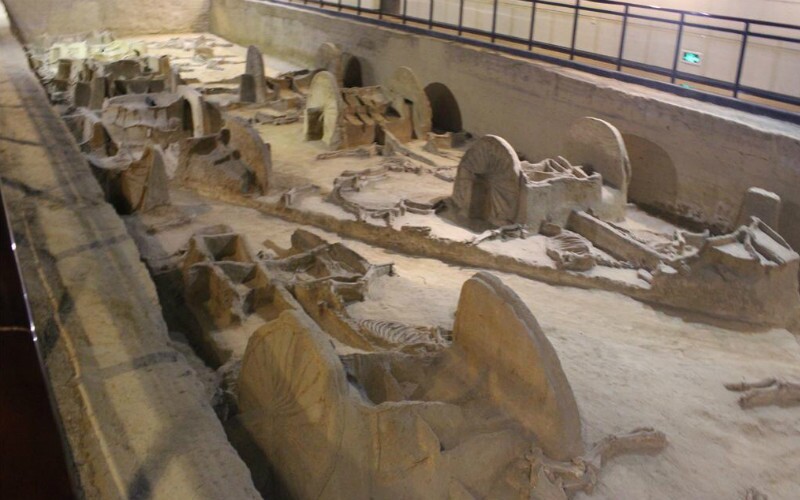 The Museum of Imperial Carriages of the Emperor of Zhou Dynasty

The Museum of the Imperial Carriages of the Emperor of the Zhou Dynasty covers 1,700 square meters and is located at the center of the Luoyang Eastern Zhou Royal City Square. The main attractions are sacrificial pits where you can see sculptures and skeletons. The museum also displays artifacts of the Eastern Zhou Dynasty. The Eastern Zhou Dynasty existed from about 770 BC to 256 BC. Their capital city was in Luoyang. This museum is a place to learn about their history and visit an archaeological site. There are two main parts to it. The first part is the main museum section, and the second part is the covered unearthed sacrificial pit.

The first part has four areas. In the first area, there is a large map showing the locations of the five ancient capitals in Luoyang and their corresponding locations nowadays. The second area instructs on the Eastern Zhou Dynasty. The third area displays the discoveries of the king's grave area and instructs about the discovery and excavation of the site; and the fourth area displays some precious artifacts of the Eastern Zhou.

Then, going through a corridor, you will get to the second section. It is a building that was built over a sacrificial pit area of the Eastern Zhou Dynasty. There are two sacrificial pits with the remains of horses and chariots that were sacrificed. These pits were unearthed in 2002 and 2003. The largest pit is about 42 meters long by 7.3 meters long. What you can see are mainly the wheels of the chariots and the skeletal remains of horses. The chariots must have decomposed. There are ancient records that say that the emperors had chariots drawn by six horses called Jia Liu (驾六), and one of the pits contains such a chariot. It is shown on its original site.

The Zhou Dynasty was one of the region's first big and long-lasting dynasties. They ruled from 770 BC to 256 BC. Initially, the governing clan ruled a large territory, but as time went on, various regions within their empire grew stronger, and the clan was reduced to a figure-head status. It is said that during this latter time of rivalry between independent kingdoms, philosophy and free-discussion were the hallmark before the Qin Empire conquered the region.