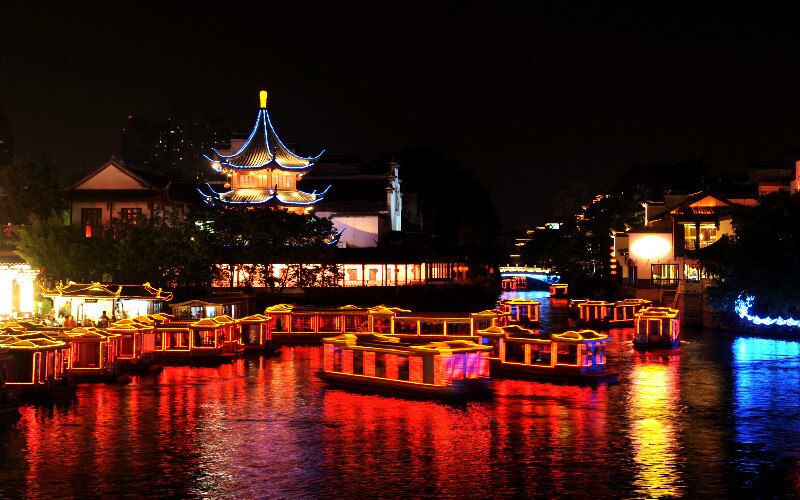 Free Things to Do in Nanjing

Nanjing is a prosperous city in China’s fast developing Yangtze Delta region. Travel costs are more expensive than less-developed areas in west China. However, there are many free things to do in the city, which may help you cut your budget.

The area around the Confucian Temple and Qinhuai River is a major shopping area in Nanjing. There are thousands of shops selling cheap Chinese clothes, cheap souvenirs, traditional snacks, and bars. Although entry to the temple was 30 yuan at the time of writing, wandering around the area is free. It is interesting to see locals doing business or to try the various local snacks.

Qinhuai River, just beside the Confucian Temple, is the birthplace of the ancient culture of Nanjing. The banks of the river were one of the China’s most prosperous business areas during the Ming and Qing dynasties (1368–1911). Traces of the glory of the area’s past remain in many of the ancient buildings along the river. The area was also the most famous red light district in Nanjing at its peak. A guide is essential to learn the interesting history of the river.

There are boats cruising on Qinhuai River, costing 80 yuan at the time of writing. The night scenery of the area is great with colorful lights. The place is large; you may need half a day to stroll around. It is very crowded with Chinese tourists.

The Nanjing Massacre Memorial is chilling reminder of the horrible acts the Japanese army did during World War Two. It was built on the site where 600,000 people living in the city were slaughtered. The museum displays many photos recording the killings, displaying remains, bloody clothes, and the weapons the Japanese army used like knives and guns.

The museum closes each Monday.

Purple Mountain is the biggest mountain in Nanjing. There are many historical sites — mainly temples and mausoleums on the mountain. Four must-see attractions on the mountain are: Purple Mountain Observatory, the oldest observatory in China still in use; Lingu Temple, a Ming Dynasty temple shrouded in big trees; Mingxiaoling Mausoleum, the tomb of Zhuyuanzhang, the first emperor of the Ming Dynasty; and Sun Yatsen Mausoleum.

The whole mountain needs a day to explore. The mountain has 300+ steep steps to climb. Begin early in the day as it becomes extremely crowded in the afternoon with Chinese tourists and locals. Read more on the Purple Mountain

Walking around the lake is an escape from the busy city. It is quite and peaceful on the banks of the lake. Locals enjoy their walk early morning or late afternoon walks along the lake. It is a good place to get a glimpse of local life.

Walking around the lake is free while entry to the park is 30 yuan at the time of writing.

The museum is closed for renovation at the time of writing, but is said to be reopening in November 2013.

The museum displays some excellent ancient ceramics, most from the Ming Dynasty, and lacquer and paintings. It is on the way to the purple mountain. You could drop by the museum on your return journey.

As Nanjing is a historical city, understanding the history behind its sights is important. An experienced and knowledgeable local guide, such as the well-trained English-speaking guides we use, will enrich your Nanjing Trip. Let's help you tailor-made a Nanjing tour.