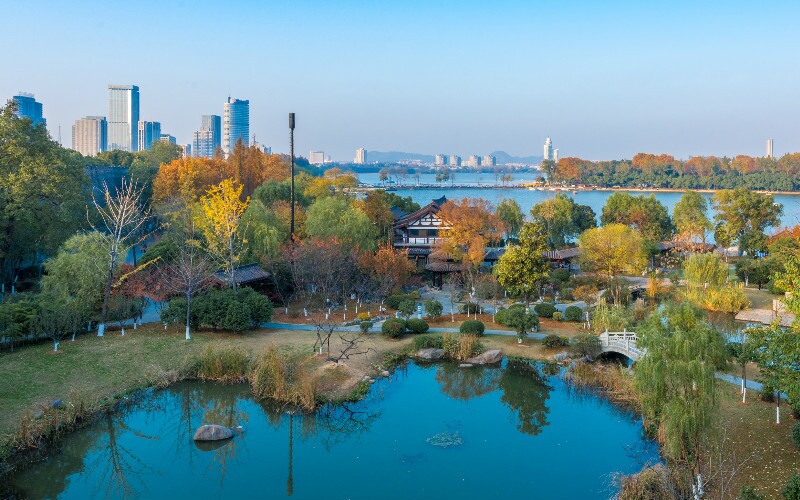 China Gate is the largest existing ancient castle in China, and it is the south gate of Nanjing during early Ming Dynasty (1368-1644).

China Gate is located in the north shore of Qinhuai River, with its primitive name is Jubao Gate (聚宝门). The gate was built in 1366, because ome legend said that the cornucopia (Jubao Pen in Chinese) of Shen Wanshan, a tycoon in Ming Dynasty (1368-1644), was buried under the gate, the gate was called Jubao Gate. In 1931, it was given another name: China Gate. With magnificent scale, complex structure and ingenious design, it is a representative defensive architecture in China.

The gate is 118.5 meters wide from east to west, and 128 long from south to north, covering an area of 15,168 square kilometers. The gate has three bulwarks which are intercommunicated by 4 arched doors. There are 27 holes for stationing troops and supplies, with a total capacity about 3,000 persons.
On the both sides of the bulwarks, there are two packways which are 11.5 meters wide and 86.1 meters long. The grand packways are ‘expressway’ of transporting supplies during wartime, and the generals also can reach the top of the city wall by spurring on the flying horse. The bulwarks play a very important role in the war. When Nanjing was suffering from the enemy’s storming, the troops could let the enemy in, then close the four arched doors, hence the enemy was divided into three parts, and the troops can destroy them one by one.

The construction of the China Gate lasted 21 years. The groundwork of the gate was built by granites, and that of the walls were bricks. Every brick used to build the gate is about 17.5 kilograms weight, with the length is about 45 cm, the width is near 20 cm, and the thickness is about 10 cm. The skill to make these large bricks is very difficult. In order to ensure the quality of these bricks, every brick was marked the name of craftsman and the construction surveyor, so as it is very convenient to investigate and affix the responsibility. That is why the China Gate is still in good addition after 6 centuries.