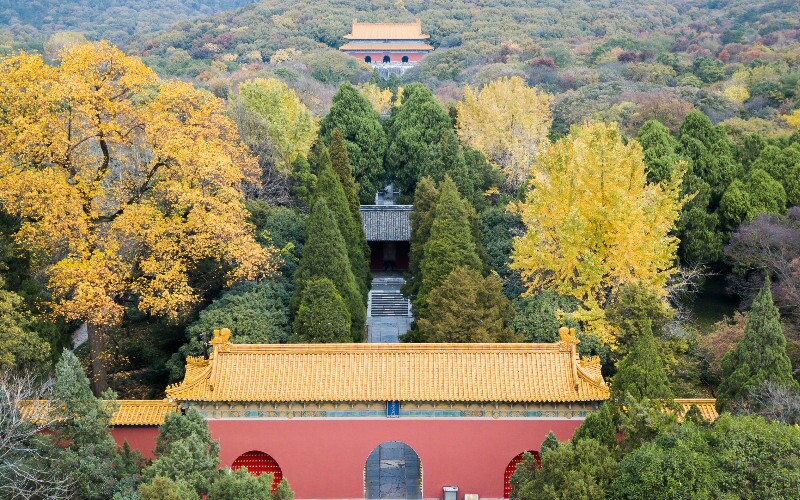 Ming Xiaoling Mausoleum is the tomb of Emperor Zhu Yuanzhang from the Ming Dynasty, and is one of the largest emperor mausoleums in existence. The construction of the mausoleum began in 1383, and the structure has more than a 600-year history.

The mausoleum consists of a front part and a back part, and is surrounded by a 45-kilometer stone wall. It was heavily constructed and planted. The front part begins where people jumped off horses at that time to Sifangcheng (the Rectangular City). You can enjoy the stone animals guarding the tomb and a pair of decorative columns, as a couple of ministers and generals have been standing there for centuries to accompany their underlying Majesty along the sacred way. The behind part includes a steel portal inscribed with four Chinese characters written by Emperor Kangxi during his third inspection tour, Xiaoling Hall, Bao City, and so on. Emperor Zhu and his queen are buried just behind Bao City. The sacred way starts from Sifangcheng, a pavilion where a splendidly carved stone stele was inscribed by his fourth son, Zhu Di, to praise the emperor's contribution. The stele is 8.78 meters high with 2746 words on it. Now, the top of the pavilion is gone and the walls are left.

The red portal of the mausoleum lies in the north and faces south, the best direction for the Chinese. The name of the tomb, “Mingxiao Ling,” is printed on the head of the gate. Two pavilions behind it were destroyed, but you can still imagine their fantastic scale from the relics. China Highlights can help you customize a tour to visit this mausoleum and other highlights in Nanjing.