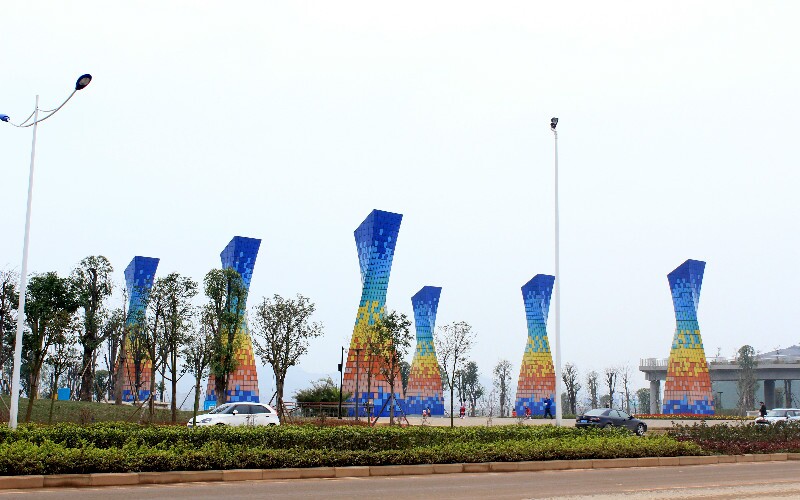 Nanning Travel Guide - How to Plan a Trip to Nanning

Nanning city is also called Yong city, Yong for short. It is the capital city of Guangxi Zhuang Autonomous Region and the political, economic and cultural center of the region. As a melting pot of different nationalities with Zhuang as its main stream, it is the only coastal opened city with typical southern scenes and characteristics among five autonomous regions in the country. With trees and flowers all around year, Nanning is a green city which combines beauty, color and subtropical sights together.

Nanning lies at the junction between China's southern, southwestern areas and the economic circle of Southeast Asia, and becomes an important economic center of Beibu Gulf. It has two geographical favorites. On one hand, it is not only near the sea-its distances to Qinzhou port, Fangcheng port and Beihai port being respectively 104, 173 and 204 kilometers, but also near the border with Vietnam-its distances with Dongxing city and Pinxiang city being only 204 and 230 kilometers. On the other hand, Nanning is near the rail lines of Xianggui, Qingui, Lizhan and Nankun rail lines and is an important rail pivot station for southwest China. Besides, Nanning is on the river shore-Yongjiang River is the branch stream of the Xijiang River which is at the same time the main stream of the Zhujiang River. The inland river transport will allow 1,000 tons barge movements form Nanning to Hong Kong and Macau upon completion of the second phase of Western River construction project.

At present, it governs six districts (Xingning, Jiangnan, Qingxiu, Xixiangtang, Yongning and Liangqing districts) and six counties (Wuming, Heng, Binyang, Shanglin, Mashan and Long'an counties). With an area of 22,293 sq.km, its population in 2003 was 6,416,700, one fifth of which was in the urban area.

Local Food You May Want to Try

Nanning is the city with all kinds of food in the world. Here, you can not only taste the classical dishes of Guangxi style, Canton style and food famous home and abroad, but also the traditional local snacks like the Old Friend Noodles (rice noodles), Rice Roll, Bazhen Rice Noodles, steamed dumplings, mungbean paste, fried field snail and so on. Precious, fantastic, delicate, fresh and endowed with ethic flavors, they are of great help to stimulate one's appetite, which make visitors forget to go home.

It is the most famous snack in Nanning with a history of a thousand years. It is said that there was an old customer who visited a tea house everyday, but he didn't appear one day since he was suffering with a cold. Having known that, the boss sent him a bowl of hot noodles cooked with chopped garlic, lobster sauce, sour bamboo shoots and chopped beef. The customer got much better after eating it, thus it was named as old friend noodles.

The noodles can help to prevent wet and stimulate the appetite, so it is a long lasting food warmly welcomed by customers.

Sour and spicy, the favor is heavy at the first chaw but you can’t stop your chopsticks at the second chaw. The duck is scrip and delicious, neither soft nor oily, but with a special smell of lemon. The sour and spicy favor of lemon duck is not only because of the lemon but also because of sour chili, sour garlic, sour ginger added in the frying and preserved lemon and perilla added just before it is ready. The preserved lemon not the fresh lemon is helpful to clear away the smell of fish and make the duck soft as well as fresh.

It is said to be a dish in the palace diet of Qing dynasty, and it has more than 8 ingredients like seafood and fresh vegetable and other dainties which complement each other. The name Bazhen which means 8 treasures is from the famous saying "Like the Eight Immortals crossing the sea, each one shows his or her special prowess".

It is another snack in Nanning. Spread the thick syrup made of soaked rice onto a white and hot cloth in a tray and put the tray into a steam box to steam it. When it is ready, roll the rice paste into the shape of tiny pillar and add with ingredients like sesame oil and wampee sauce. The food taste fresh and soft and smooth.

Sour pickles are preserved fruits and vegetable. Nanning has a long history of eating sour pickles. In a hot climate, eating sour pickles was to preserve cool and prevent wet, and the custom has persisted to the present day. Usually, the local products like mango, plums, pawpaw, peaches, cabbage and other fresh fruit and vegetable are pickled with ingredients like sugar, chili and vinegar. Sour, sweet and spicy, they are scrip and fresh, which is helpful to stimulate one's appetite.

Note: zhongshan Delicacy Street is a traditional delicacy street in Nanning, colleting all kinds of old cafes and restaurants and gathering the local traditional snacks and food, such as the old friend rice noodles, Bazhen rice noodles, steamed dumplings, duck blood, seafood, sour pickles and so on. After 10:00 p.m., the street is crowed and bright as daytime, which forms a special sight in Nanning.