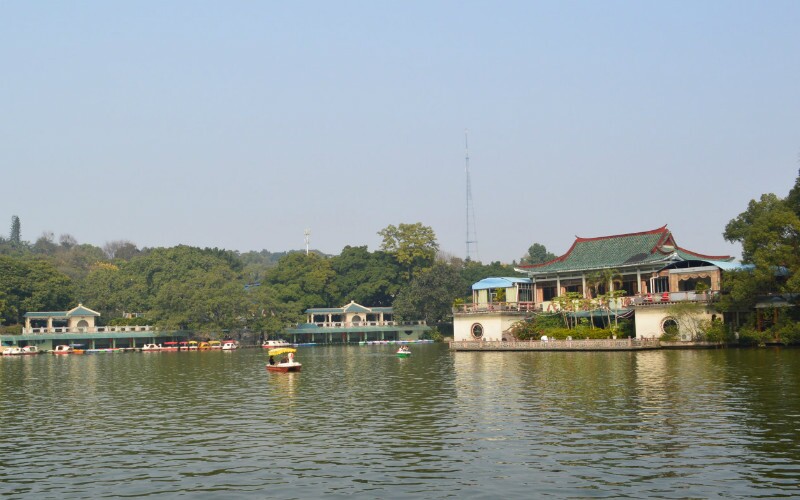 Built in 1951, the People's Park is also called Bailong Park for the Bailong Lake of 70000sq.m in it. According to the "Records of Scenic Resorts", the famous general called Di Qing in Song dynasty once stationed here with his army.

One day, found that the scene of a flock of white sheep walking along the lake was just like a moving white dragon, he named the lake Bailong which means white dragon in Chinese. Thus, its name already has a history of more than a thousand years.

Scenic spots in the park are Zhengning Emplacement, Bailong Lake, Jiuqu Bridge, Huxin Pavilion, Bailong Restaurant, Children Amusement Park, Goldfish Pool, Underground Ice Room, Martyrs Memorial and so on. Facing with the gate is the main body of the park, Wangxian Slope which is covered with green trees. It has a corridor of 141 steps and 10 meters in width leading to the top. Legend has that Luoxiu of Jin dynasty had reached enlightenment and went to heaven on the Luoxiu Mountain, and the slope just got its name Wangxian which means watching the fairy since it faces to the Luoxiu Mountain. On the top of the mountain, there was a Ancestral Hall to memorize the historical celebrities which had contributed a lot to Nanning, namely Di Qing, Sun Miao, Yu Jing, Su Jian, Wang Yangming and Mang Yitu.

However, it was broken down by the Guangxi warlord Lu Rongting in 1917 and replaced by an emplacement, the Zhenning Emplacement. Built with bluestone, it is a ring-shaped castle with a high board on which placed a cannon gun made in Germany in 1890. Since the Wangxian Slope is the highest place in Nanning, on the emplacement looking down, you can have a bird’s-eye view of Nanning, which reminds us of the old stories of the city.

Besides, the Bailong Park also contains the largest coppice forest botanical garden with the largest number and sorts in the region, a subtropical fancy garden which combines scientificity, information, art and interest together.In the south of the Wang Xian Slope, there lies the Bailong Lake which is surrounded by green bamboos and willows. In the middle of the lake, there is an island, connecting with the land by two bridges, Jiuqu Bridge and Sankong Bridge which located in the west and the north of the island respectively.

Near the park, there are several streets of snack where you may find something to please yourself, like Xinjiang’s brochette beef, roasted food, bean curd with odor, roasted sweet potato, beggar’s chicken and so on.