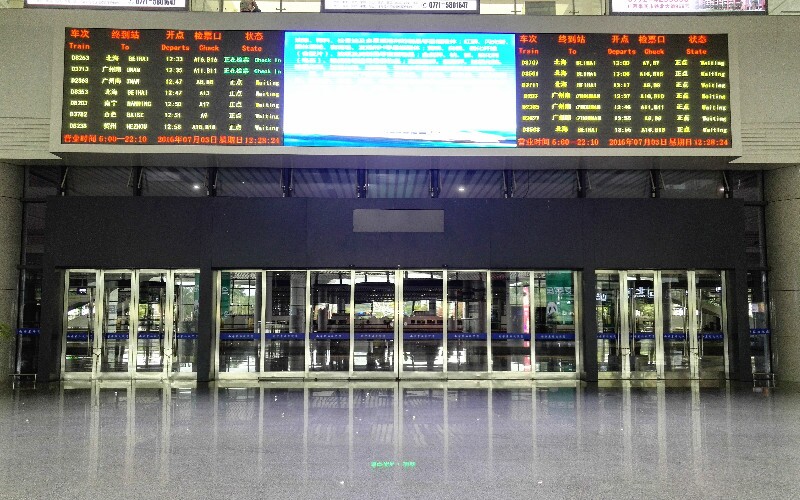 As a national 4D-class airport which is 32 kilometers away from the urban area, Nanning Wuxu International Airport (南宁吴圩机场） has now opened more than 20 national and international flights to Beijing, Shanghai, Guangzhou, Hong Kong, Bangkok, Hanoi and so on. There are special buses running between the airport and urban district everyday and passengers can take them at the ticket office for civil aviation at the railway station. Besides, many hotels and guesthouses also provide meeting and seeing off service.

For passengers' convenience, the airport manages shuttle buses to the city according to the arrival time of each flight. Two bus lines connect the airport with the urban area: Airline shuttle bus with a ticket of 15 yuan departing from the Ticket Office of Nanning Civil Aviation Airline (near Nanning Railway Station) from 5:30 in the morning to 19:00 in the evening; and No.301 bus line with only 2 yuan per person also runs between the airport and urban area. Besides, taxies are also available. It takes about 40 minutes and costs about 100 yuan. Many grand hotels also provide picking-up services at the airport, one can consult about this when making a hotel reservation.

As the meeting point of many inland railways, the station has trains directly to most large cities in China, including Beijing, Shanghai, Guangzhou, Xi'an, Chengdu, Kunming and Zhangjiajie. Other railway lines extend to the cities of Hunan, Guizhou, Yunnan, Jiangxi provinces as well as some provincial cities including Guilin, Beihai and Fangchenggang. Due to its special border location close to Vietnam, international railways are opened directly to Dongdang in Vietnam and there may be more in the future. Many city buses have stops near the station.

In addition to train ticket sales at the aforementioned Nanning railway station, the visitor can also purchase train tickets at other alternative railway ticket offices round about the city of Nanning.

The bus transport is well developed in Nanning, having introduced the Hong Kong Baima (Group) Company with which the Nanning Bus Head Company established the Nanning Baima Bus Company at joint venture. At present, there are 2050 buses owned by 4 companies, and all of them are self-ticketing bus at cost of 1.2 yuan for common one and 2 yuan for those with air-conditioners. By using the IC card, passengers may enjoy some discount. And the earliest running time is 5 in the morning and the latest one is 12 at night.

Car rental charges are good for the vehicle use in urban district of Nanning City only, with maximum mileage of 300 km (186 miles) per day. Extra charges will levied upon extra mileage. To rent a car, travelers need to pay a deposit of 5000 yuan and show the identity cards, driving licenses and other valid documents. Prices for Car Rental Service (for reference only):

There are about 3700 taxi belonged to 9 taxi companies. They are in different colors but with uniform taximeters and roof lights, and the minimum fare of the initial two kilometers is RMB 7.

Nanning has formed a convenient and quick transport network composed of national road, provincial road and highway, which closely connect with each other and can lead passengers to every county and city in the province as well as the main cities in the country. With Nanning as its main node, the Guilin–Beihai highway is the longest regional one in the country. The nearest passage to sea in the southwest China, Nangning – Hechi (Shuiren) highway had come to service in September, 2004 which connects Guizhou, Sichuan and other places. Besides the highway to Guangzhou and other projects are under construction. In all, in the urban area there are six long-distance passenger stations which have 371 routes and provide coaches to 7 regions inside and outside the city, and 57 counties and cities.

Long-Distance Buses to Hanoi in Vietnam

There are cross-border buses from Nanning to Hanoi in Vietnam, taking 7 hours for a single trip.

The Yujiang River running through Nanning city is merged by the Zuojiang River and Youjiang River meeting at Sanjiangkou, and its section from the urban area to the Bachi River in Yongning is called the Yongjiang River. Being the leading port of the waterways on Xijiang River and a pivotal port of inland river in the country, Nanning port is an important component of the sailing passage in the southwest which takes on the responsibility of collecting and dispatching goods from and to Nanning and its surrounding regions, transporting the exports from the province and partial goods delivered by Nankun railway. Its main lines include Yongwu line, Yongshui line, Yongbai line and lines to Hong Kong and Macau, which can lead passengers to Longzhou, Baise, Guigang, Wuzhou, Guangzhou, Hong Kong and Macau.