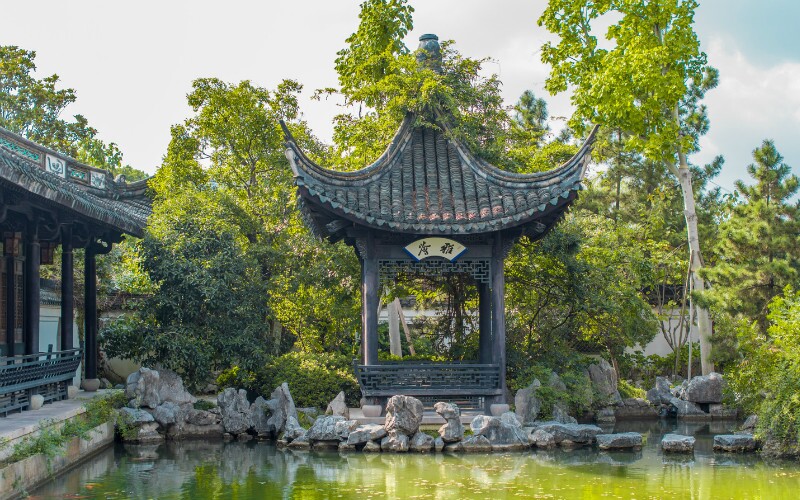 The temple of Liang Shanbo, which was built in 397, has a history of more than 1600 years. Over the years of instability, the temple experienced rise and fall. With the temple of Liang Shanbo as the main body and the story of Liang-Zhu as the main clue, the park is composed of a good many scenic spots, including Kwan-yin Hall, Spouse Bridge, Conjugal Love Pavilion, Lotus Pond, Nine Dragon Pool, Dragon Valvule Pavilion, Bailing (One Hundred Year Old) Road, the Statue of Liang and Zhu Transformed into Butterflies, the Large-scale Fountain Square, Wansong (Ten Thousand Pines) College and Sacred Gentleman Liang’s Temple.

Legend of the Park The legend of Liang and Zhu is a beautiful, doleful, and moving love story. In the East Jin Dynasty, in the village of Zhu family in the county of Shangyu in Zhejiang Province, on the bank of the Yushui (Jade Water) River, there was Yuanwai (a minister appointed outside of the usual structure of official posts) Zhu who had a daughter called Yingtai.

The girl was beautiful and intelligent. She learned to write poems from her brother since a child. Envying the scholarship of Ban Zhao and Cai Wenji, and regretting lack of excellent masters at home, she was intent on visiting masters and pursuing studies in Hangzhou.

Yuanwai Zhu rejected his daughter’s request, but Zhu Yingtai, who was hungry for study, dressed herself like a man. Her father saw his daughter in men’s clothes without any flaw and had no choice but consented with disinclination as he couldn’t bear to disappoint her.

Yingtai was dressed up like a man and went a long way to Hangzhou for study. On her way, she was encountered with Liang Shanbo, a scholar from Kuaiji (now Shaoxing) who also went to Hangzhou for study. They felt like old friends at the first meeting and had a happy time studying together. Therefore, they gathered some soil as incense and took vows of brotherhood in the pavilion of a thatched bridge.

In less than a day, they two arrived at the Wansong College of the city of Hangzhou, and learnt from masters. Hence, they read in inseparable companion. They had been classmates for three years with ocean deep love. Yingtai was in deep love with Shanbo, but Shanbo didn’t know she was a female all along, and therefore he only thought of brotherhood without special feelings.

The father of Zhu missed his daughter and urged her return anxiously. Hence, Yingtai had no choice but came back to her home in a rush. The Liang and Zhu parted reluctantly. On the way of Shanbo’s seeing Yingtai off for eighteen miles, Yingtai expressed her love constantly in an explicit way with the aid of objects. Shanbo was true and simple, thus not being able to understand this. Yingtai had no choice but lie that she had a sister called “Jiumei” back at home, who looked very much like herself, and she was willing to promote a marriage for Shanbo. However, Shanbo was from a poor family and didn’t arrive as scheduled. When Shanbo went to Zhu’s house to propose a marriage, Yingtai’s father had married her to Ma Wencai, who was the son of a procurator living in Mao City (now Yin County).

A perfect union had become a shadow. They two met at platform, gazed at each others’ tearful eyes and bid farewell to each other sadly. When they parted, they took a vow: even if they can’t sleep in one bed, they want to be buried in one grave!

Later Liang Shanbo was appointed as the magistrate of Yin County by the Court. However, Shanbo was so depressed as to become ill and died soon. His dead body was buried in the Nine Dragon Ruins of Mao City. When Yingtai heard of Shanbo’s death, she swore to sacrifice her life.

When Yingtai was forced to get married, she made a detour to hold a memorial ceremony in front of Shanbo’s grave. Under the influence of Yingtai’s lamentation, it stormed, thundered and lightened, and the grave burst. At that time, Yingtai jumped into the grave trippingly and the grave was folded again. The wind and rain stopped with a rainbow hanging high up in the sky. Liang and Zhu turned into butterflies and flied trippingly in the world.