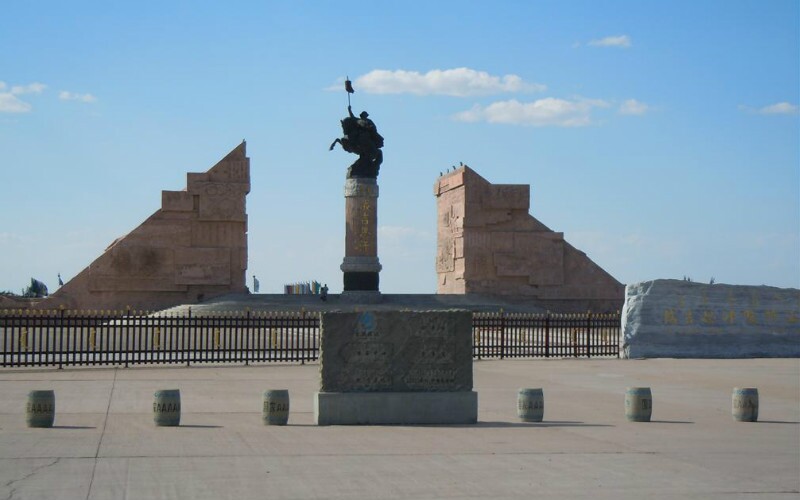 Ordos Travel Guide - How to Plan a Trip to Ordos 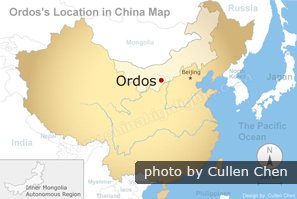 Surrounded by the Yellow River on the west, north and east, the city of Erdos is located in the southwest of Inner Mongolia Autonomous Region. The city is in the middle reaches of the Yellow River. Ordos is a Mongolian name, meaning a place with a great number of palaces.

As one of the cradles of Chinese civilization, the city of Erdos has a long history. As early as 35,000 years ago, the ancient Hetao People began to live on this land and created a glorious culture. In the Thirteenth Century, the great Mongolian conqueror Genghis Khan was greatly impressed by the beautiful scenery here when he passed this city on his way to conquer the Western Xia Kingdom. Western Xia was a state that existed from 1038 to 1227 in what are now the northwestern Chinese provinces of Gansu, Shaanxi, and Ningxia. It was established in the Eleventh Century by Tangut tribes. He loved this place so much that he made up his mind to build his tomb here in the future. In the year 1649, in the Qing Dynasty (1644 -1911), the Chinese government set up a Mongolian prefecture here.

On the vast and splendid Ordos Prairie, the blue sky, the white clouds and the yellow sands are all desperately alluring and amazing. The endless desert, the strong spirits, and the sweet milky tea make visitors dizzy and intoxicated. What's more, as the local nomadic Mongolian people are good at singing and dancing. Tourists can always see them singing on galloping horses and dancing on the broad grassland. The famous picture described in traditional songs, with white clouds that float in the blue sky and gallant horses galloping on the vast prairie, becomes a reality here.

It would be a great life experience to enjoy the unique natural sight of the great desert, walking in the winds and sands, appreciating the special beauty of the desert lakes, and to explore the ancient and mysterious Mongolian folk customs. There are many more wonderful and exciting places of interest here, such as the great Yellow River Valley at Zhungeer Basin, where steep cliffs and historical relics can be observed on the two banks of the river; the tomb of Genghis Khan; the cultural relics of the ancient Hetao People; the relics of the Twelve Connecting Cities; and the famous Buddhism Lama Temple, which is called Zhungeer Zhao in the local Mongolian language. You can learn a lot about the history of Ordos from visiting the above-mentioned places. 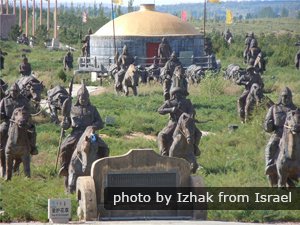 The city of Ordos has a typical temperate continental climate. There are distinct four seasons and the sunshine is very intense and strong. There is little rains throughout the year and in spring sandstorms occur frequently. The average annual temperature is 7 degrees centigrade, and in July the average monthly temperature is 23 degrees. Most rain falls in July, August and September.

The annual Mongolian Nadam Fair held in August on the Ordos Prairie. The different activities held to worship the great Mongolian hero, Genghis Khan, on March 21st, May 15th, August 12th, and October 3rd in front of the Genghis Khan Tomb, are traditional Mongolian folk culture activities, which should not be missed by tourists. It is the best opportunity for visitors to learn about the unique sacrificial culture, singing culture, dancing culture, and costume culture of the descendants of Genghis Khan.

How to Get to Ordos

Erdos is located in southwestern Inner Mongolia, neighboring several cities, including Hohhot, Baotou and Yulin. Among numerous tourist attractions, including natural scenic spots (such as Erdos Grassland and Resonant Sand Gorge) and historic sites (such as Mausoleum of Genghis Khan and Zhaojun Grave), the most famous one should be Mausoleum of Genghis Khan. In China’s railway network, Erdos is the transportation junction in Northwest China.

Erdos Airport is located in Taige Town, Ejin Horo Banner (伊金霍洛旗布尔台格乡), being about 45 kilometers from Erdos urban area and 20 kilometers from Mausoleum of Genghis Khan. Flights linking Erdos with Beijing, Shanghai, Xi’an, Shenzhen, Hohhot, Sanya, Zhengzhou and Chengdu are available in the airport.

Erdos plays an important role in China’s railway network with several railways running pass the city. At present, trains to Hohhot, Baotou and Shenmu are available in Dongsheng Railway Station (东胜火车站), Erdos. However, passengers intending to Beijing, Tian, Shenyang and Xi’an should be transfer to corresponding trains in Baotou, and passengers can only purchase train tickets to above cities in Dongsheng Railway Station.

National road 109 and 210 run though the city, which brings a great convenience to Erdos’ transportation. Besides some counties and towns in Erdos, coaches/buses to Hohhot, Shijiazhuang, Yan’an, Shenmu and Baotou are also available in the city. There are two coach/bus stations in Dongsheng District, Erdos, the one near Zhengfu Street (政府街) sends coaches to other cities, while another (Shenxin Bus Station: 神鑫汽车站) sends coaches to nearby towns.

Erdos has 7 bus routes. Bus 1 and 4 go by Dongsheng Railway Station, and the rest all go by coach/bus stations.

The flag down fare for catching a taxi is 5 yuan. Because Erdos is very small, 5 yuan is enough for taking a taxi to most places in urban area.