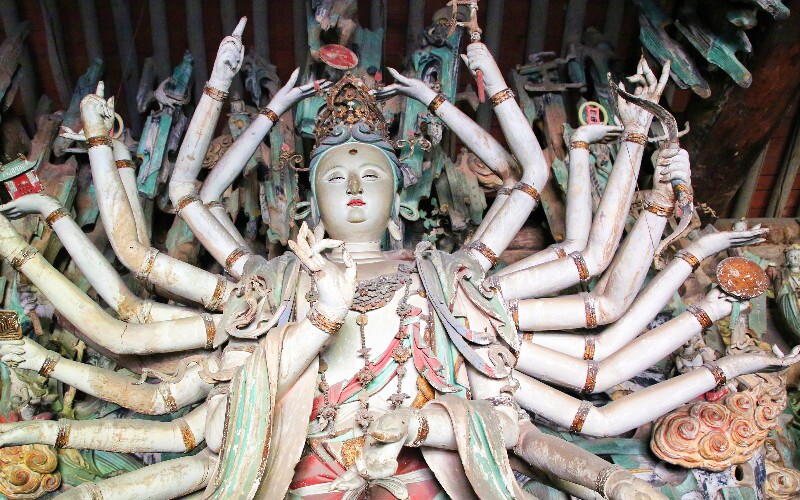 Shuanglin Temple (Double-Grove Temple) is one of the most important historical sites in Pingyao County, a famous historic and cultural county in China. The highlights in the temple are those thousands of spectacular painted sculptures.

Located in Zhongdu Town, a town in southwest Pingyao County, the Temple had a former name called Zhongdu Temple, and during the Song Dynasty (960–1279), it was given another name Shuanglin Temple. Because the lack of recorder, it is impossible to definite the exact year when the temple was built, but according to the most ancient stone tablet which recorded the rebuilding in 571, the history of Shuanglin Temple must has been longer than 1,400 years.

The temple was rebuilt on a large scale during Ming (1368–1644) and Qing (1644–1911) Dynasties, hence most of the architectures in the temple are in Ming and Qing Dynasties styles. Shuanglin Temple covers an area of 15,000 square meters (161,459 square feet), and is surrounded by tall rammed earth wall, which makes the temple look like a castelet. Facing south, the temple consists of tree main parts: ten halls which are situated in the central axis in three stages (forecourt, middle-court and back-court), including Hall of the Celestial Kings, Hall of Sakya, the Great Buddha’s Hall and Niangniang Hall (Hall of Goddess); sutra depository and the living rooms of monks are located in the east; and a courtyard lying in the west.

Entering the gate of Shuanglin Temple, the hall right in the north is Hall of the Celestial Kings. There are marvelous sculptures of four Buddha's warrior attendants standing under the eaves of the veranda, and each of them are three meters (ten ft) high. Inside the hall, the sculpture of Maitreya sitting in the center with sculptures of four celestial kings in the north and sculptures of eight Bodhisattvas in the south. The four spectacular sculptures of celestial kings are three meters (ten ft) high, and each of them holds an article in their hand (these articles are a Pipa–a stringed Chinese lute, a sword, a snake and an umbrella, and they are symbolize earth, gold, wind and water which imply an abundant harvest with good weather for the crops).

Going through the Hall of Celestial Kings, visitors arrive at the Hall of Sakya, one of the main shrines in Shuanglin Temple. The main sculptures in the hall are Sakyamuni, Manjuri and Samantabhadra. The vivid relievoes on the wall show the story of Sakyamuni. The sculpture of Avalokitesvara sitting on the pedestal with her right leg bent and left one stepping on a lotus leaf is one of the most splendid ones in the temple. A bell tower and a drum-tower are respectively situated on both sides of the Hall of Sakya. The bronze bell on the bell tower is made in Qing Dynasty.

Located in the middle court, the Great Buddha’s Hall and two halls (the Hall of Bodhisattva and the Thousands-Buddha Hall) respectively in its both sides are also worth to visit. The Great Buddha’s Hall was reconstructed in Ming Dynasty, and is the largest architecture in typical Ming Dynasty style in the temple. The main sculpture in the Thousands-Buddha Hall in the east is a sculpture of Avalokitesvara in a comfortable posture. Among the rest more than 500 sculptures, the one of Skanda by the side of Avalokitesvara is also one of the master pieces. Those lifelike portraits on windowsills and the sides of the gate are invaluable materials for the research of the costumes in Ming Dynasty. In the Hall of Bodhisattva, the beautiful sculpture of One-thousand-hands Avalokitesvara with gentle expression, dignified appearance, lively sculpt and bright colors, is one of the highlights among the thousands of sculptures.

There are so many splendid painted sculptures in the temple that it is known as the ‘treasure-house of the sculpture art of the Orient’.