Wang family courtyard is an example in handing down and inheriting the five thousand years' old Chinese civilization and a peak-usurping masterpiece of Chinese civil residence architecture of Qing Dynasty. It was built by the Wang family in Jingsheng, the posterities of Taiyuan Wang family, which in history had been one of the four large families in Lingshi county. It was successively built in the periods of Kangxi, Yongzheng, Qianlong and Jiaqing in Qing Dynasty. The architecture has a magnificent scale with five alleys, five forts, and five ancestral temples. Besides, the courtyard layout of the five ancient forts were respectively compared to designs of five lucky animals of “dragon, phoenix, tortoise, kylin and tiger”. 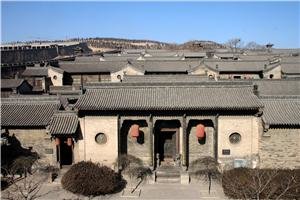 The three architectural complexes of Gaojiaya, Red-gate Fort, and Chongningbao are all full closed fortress architectures on the Yellow High Land (loess high slope), which are closely connected with each other through bridges. They appear grand and harmonious with the surrounding environment and comply with the terrace in both the form and meaning. While in the inside, cave houses and tile built houses get connected artfully and excellently.

The two main courtyards of Gaojiaya architectural complex are 3-year Siheyuan (quadrangles), which have separate kitchen yard and home school yard with private tutor as well as common classics-learning academy, flower yard, long-term hired farm-laborer yard and enclosed yard (servant yard), in addition to the sacrificial ancestral hall at high place and the embroidering buildings on both sides.

The Wang's Museum set up in Red-gate Fort will be the study, exhibition, collection and development centre of Wang's culture and also the historical destination of the overall image of Wang's family. It is the only museum of Wang’s family culture at home and abroad. The overall layout of Chongningbao architectural complex is similar to that of Red-gate Fort.