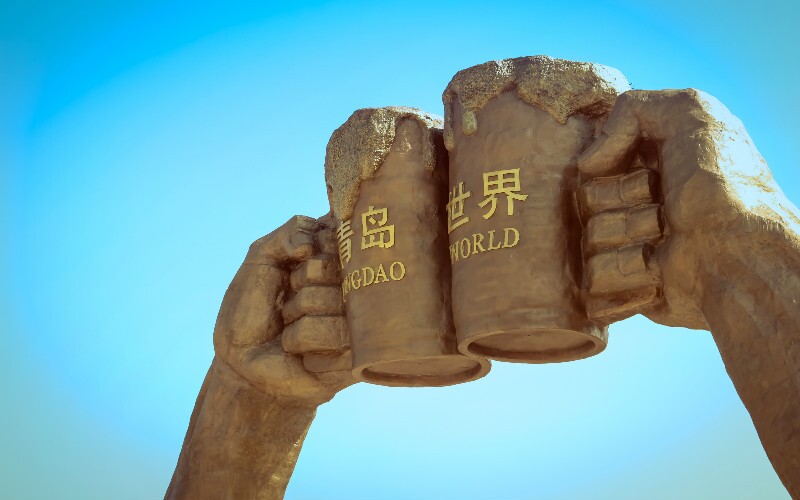 The name of the sculpture is "spilling over the world".The sculpture is molded like a high-heel cup and the design of the high-heel cup is the world map-beer foams are spilling continuously from the cup and the band of Qingdao Beer(Tsingtao Beer) can been recognized from the cup. Its token meaning is very clear too. And there is a semi-Luna stone wall at the back of the round pond. The letters of "International Beer Town" can be read easily. In the evening, fountain, water columns mirror each other naturally and make a charming picture. Around the token sculpture, a fan-shaped beautiful plaza which can hold 10 thousand people is there.

Before the year 1998,the ceremony of International Beer festivals was always held here. There are open air arenas and thousands of chairs in the grass of the fan-shaped beautiful plaza. and the plaza has been a forever place for festivals in Qingdao the roads from the plaza to other places are bordered by colored marbles and are very characteristic in china.

The south of the plaza is the place for beer palace and there are two huge unusual buildings .During the festivals, beer match, food exhibition and entertainment, fashionable dress performance will attract thousands of tourists to come here. Qingdao Beer Manufacturer establishes a mini production line at the prime food fare. tourist not only can taste pure beer just produced from the  production line but also can visit all the procedures of beer production. In the east of the plaza, there is a beer street where almost all kinds of flavor food and name brand beers can be tasted and bought. It is an apple of the tourist's eyes. A great beer hotel will be established at the corner of northeast of the plaza There are many precious flowers and precious trees in the amusement park sprinkled by statures in the north of the plaza. The place of Beer exhibition is in the west of the plaza ,where world famous beers are exhibited. And annual International Beer Fare will be held here regularly.

qingdao Qingdao Travel Guide - How to Plan a Trip to Qingdao

qingdao Top Free Things to Do in Qingdao