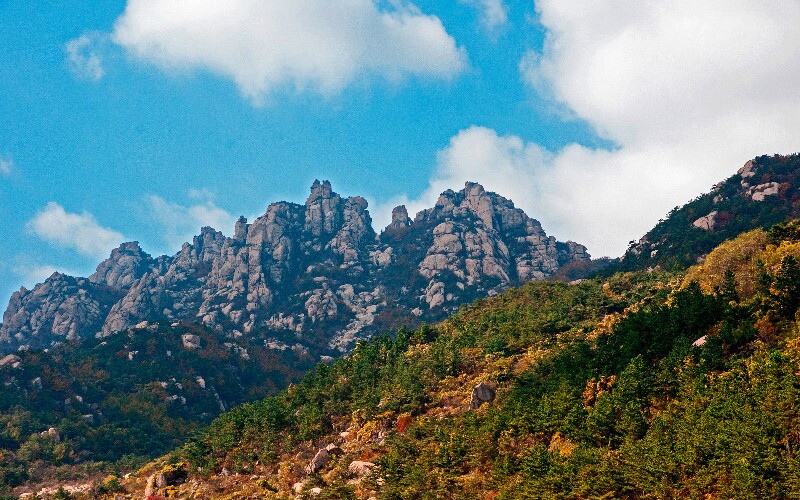 Laoshan Mountain is the highest mountain along China's 18,000-kilometer-long coastline, as well as the only mountain with a peak of over 1000 meters along China’s coastline. In the book of "Qi Ji" (a record about China between BC 478- BC 221), there is a statement that "Tai mountain is not higher than Laoshan Mountain along Yellow sea". The description was not referring to their actual heights, but instead focused on their comparative impressions . Laoshan is said to be home to some “Supernatural Spirits". In the Qin Dynasty (BC 221-BC 206), the first emperor Qinshihuang once came here to visit these “supernatural beings”. In the Tang Dynasty (AD 618 – AD 907), the great emperor Lee Longji also traveled here to find herbal medicines for eternal life. Over the course of history, many other famous scholars visited Laoshan Mountain and wrote poems and essays about the mountain.

Laoshan Mountain area was home to the second largest Quanzhen Group of Taoism in history. At the height of its prosperity, there were 9 palaces, 8 temples, and 72 nunneries. The Taoists from Laoshan Mountain were well known for their religious knowledge, legendary skills and stories. Two famous Taoists during this time were Mr. Qiu Changchun and Mr. Zhang Sanfeng. The former was a notable VIP in the Yuan Dynasty (AD 1206– AD 1368). The latter was said to be the creator of Tai Chi. Many of the Taoism temples and nunneries in Laoshan Mountain have been ruined or destroyed over the years. The one remaining Taiqing Palace Taoism Temple, built at the beginning of the North Song Dynasty (AD 960-AD 1127), is the largest and oldest preserved temple. It is also known as Xiaqing Palace Taoism Temple. “Tai Qing" means a heaven of supernatural beings. There are three buildings in Taiqing Palace Tao Temple: Sangong Palace, Sanhaung Palace and Sanqing Palace.

There are two very old cypresses in Sanhuang Palace. These were planted in the Han Dynasty (BC 206-AD 220). A rare camellia, in front of the Sanhuang Palace, has been alive for over 700 years. The tree is 8.5 meters high and the width of the trunk is 1.78 meters. Even in winter, green trees and blooming flowers surround Taiqng Palce Tao Temple. There was once a white peony, whose height almost reached the eaves of the Palace. There are many scenic spots around Taiqing Palace Taoism Temple: Shewnshui Spring, Longtou Yu, and Stone Inscriptions are among some of them.

China Highlights can help you customize a tour to visit Laoshan Mountain and other highlights in Qingdao.