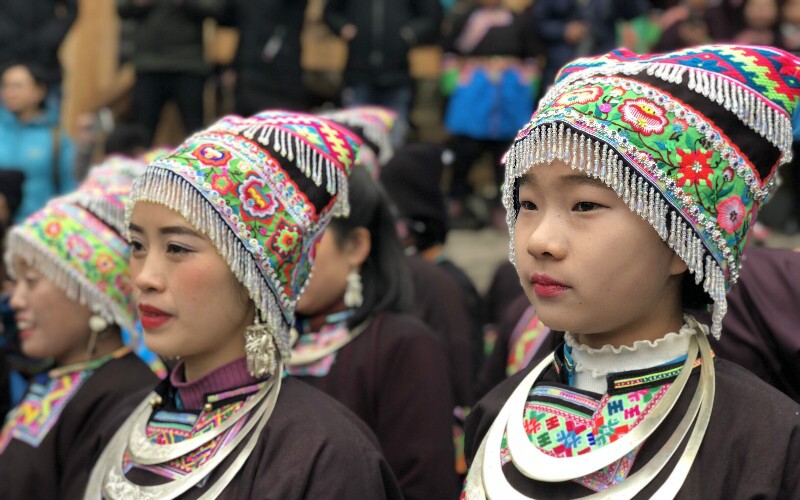 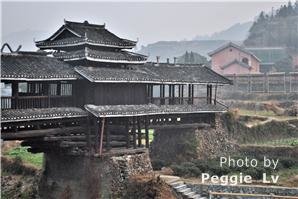 Located at the juncture of Guangxi, Hunan and Guizhou provinces, Sanjiang Dong village is in Sanjiang Dong Autonomous Prefecture with mountains and rivers surrounded. Sanjiang means three rivers, named after the three rivers in the county, Rong River, Xun River and Miao River. Sanjiang Dong Village is a special and quaint village where the old custom and tradition still remains. Most of the residents here are Dong people, so the main reason to visit here is to admire the spectacular Dong architecture, the breathtaking natural scenery and the splendid culture of Dong ethnic group.

The Dong people prefer to build their houses on the slope of the mountains near rivers and streams due to the Chinese fengshui. When coming to a Dong village, the first amazing architecture that would strike your eyes is the wooden wind and rain bridge. The bridge crossing the river is the main access to the village and the local people like to sit in the bridge chatting and relaxing. The bridge is a tile-roofed corridor architecture made of wood and stone. When take a closer look of the wind and rain bridge, what would surprise the visitors is that people can't find any nails on the whole bridge. This kind of mortise and tenon structure needs very professional skills to build. But what's more, the bridges were all done by the local people without blueprint and the technique was handed down by oral transimission through ages. Now the wind and rain bridge has become the symbol of Dong architecture.

After crossing the wind and rain bridge, the Dong village is present in front of you. In the village people will find out that most of the residential houses look like the same. The houses are the typical stilt style wooden architecture with three floors and each floor has different functions. Due to the humid climate in the mountain area, the first floor is for keeping the domestic animals. From the second floor on, the climate is better than the first floor. So the second floor is for living. Bedrooms are at both sides and the kitchen and dining room are in the middle of the house. The Dong people regarded kitchen as a holy place so the stove is just in the center of the house. According to the eating habits of the Dong ethnic group, people like to eat sticky rice, oil tea and sour meat and vegetables. It is said that in the past time, salt was very expensive for those who live in the far mountain area. And it was hard to eat food without any flavor. The clever Dong people created a method to ferment the meat and vegetables naturally for a couple of months till the food become sour. They thought sour is much better than no flavor. Another reason for Dong people eats sour meat and vegetables is that when they eat sticky rice, the sour can help digest the rice. On the third floor of the house, the air circulation is great. People keep their harvest crops and rice on this floor as a storage room. 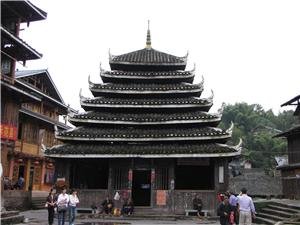 In the middle of the Dong village, there always stands a pagoda-shaped building with seven to thirteen floors tall. It is called Drum Tower. The structure of the Drum Tower is joined together with wood, without a single iron nail, same structure with the Wind and Rain Bridge. In China, every Dong village has at least one drum tower in the center. It is the representative of the Dong village and plays an important role in the Dong people's lives. The Drum Tower is a place to hold social meetings and activities. When the Dong's traditional festivals come, the villagers will gather together at the Drum Tower, sing folk songs and dance traditional dances here. It's a great place to experience the centuries-long custom and the splendid traditional culture of the Dong ethnic group. Now the most famous drum tower is Sanjiang Drum Tower in Sanjiang County built in 2002 to celebrating the 50th anniversary of the autonomous prefecture's foundation. It is the tallest drum tower in the world with a height of 42.6 meters and attracts many tourists to visit it.

sanjiang Sanjiang Travel Guide - How to Plan a Trip to Sanjiang