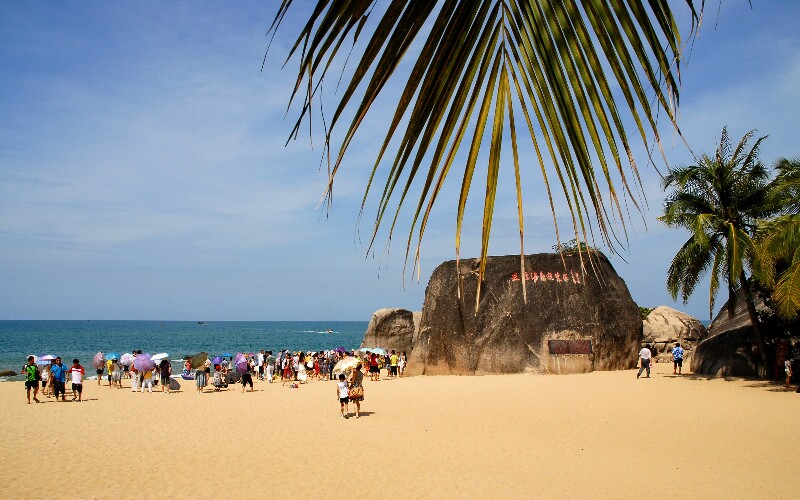 Tianyahaijiao (which means “The Edge of the Sky and the End of the Sea") Tourism Zone is composed of Tropical Ocean Park, a shopping area and a holiday village with hotels lined up along the coast towards Sanya. Visitors can enjoy a combination of tropical sea sights, beautiful beaches, historical relics and folk culture. It is one of the best beaces in China. See China's top beaches. The legendary Chinese words Nantianyizhu were written by Fang Yunti, the chief magistrate of Yazhou Prefecture (Yazhou Prefecture was Sanya’s old name) during the Xuantong Period (1908-1911) of the Qing Dynasty (1644-1911).

It is said that a long time ago, two fairy maidens of Li nationality in Lingshui (now a Li Minority Autonomous County in South Hainan) descended secretly to the world to help the fishermen in the South Sea to fish. Very annoyed at that, the empress sent the Thunder God and Goddess to bring them back. Because the fairy maidens refused to obey the order, they were turned into rocks and cleaved into two parts. One fell into the sea near Li’an, Lingshui, and the other, now called Nantianyizhu, fell at one side of Tianya.

A Nantianyizhu scene was printed on the reverse side of the two yuan note (1986 edition).

How to get there?

Take any bus at a cost of 1 yuan from Jiefang road to Sanya Long-distance Passenger’s Western Station and then take a mid-bus to Tianya, Nanshan, Yazhou town and Huangliu. This bus usually has pasted on its front in Chinese, “Tianya”. By taking the Haiyu Western highway, which is very smooth, visitors can arrive at the front gate of the Tianyahaijiao Tourism Zone after 24 kilometers and 30 minutes, and at a cost of 3 yuan. Moreover, visitors can take either a minibus to Tianya and Nanashan for 4 yuan or a taxi for 25 to 30 yuan.

Sanya Sanya Travel Guide - How to Plan a Trip to Sanya